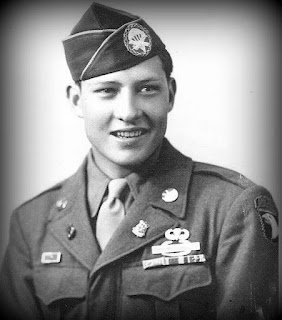 TODAY IS THE ANNIVERSARY OF D-Day, World War II, June 6, 1944.
The young man in this photo is Dennis R. Moore, my husband's eldest brother who took part in this Allied Invasion that marked the turning point in the European Theatre.
Like so many soldiers in that war, Dennis was just a teenager when he enlisted. He was a paratrooper and served with the OSS. He got through the war safely, only to die at the age of 36 in a construction accident in Geauga County in 1961.
On his return from the war, he married Lorene Eging of Chardon, OH. They settled in Huntsburg, OH and had two sons, Greg and Gayland.
The eldest son of Blanche and Otmer  Moore of Lake County, Ohio, he was an usher in my husband's and my wedding in 1960, and his eldest son Greg was the ring bearer.
Today, I salute Dennis and all the members of his Greatest Generation, many of whom were lost.

Posted by roseabouttown (Rose Moore) at 6:49 AM