Today was a wonderful day, filled with sunshine, blue skies and love.

We said goodbye to a man loved by family, friends and community.

We were surrounded by family and friends, from the service to the interment to a gathering filled with laughter and memories and good conversation, celebrating the man who lived the good life--Robert Moore.

Oh, how we loved him. His warmth will be with us forever.

And we thanked God for letting us have him so long in our lives.
Posted by roseabouttown (Rose Moore) at 1:46 PM

I am so proud of our sons, daughters-in-law and grandchildren.      They did a beautiful job with calling hours today. I could not have done it without them.
We opened the doors a bit before noon, and the constant flow of people were still coming through after 3:30.
They spoke of our Bob with so much affection and respect, even though some had been waiting in lines for an hour. Wonderful people! They will miss Bob.
And we will too.

Posted by roseabouttown (Rose Moore) at 5:46 AM

REST IN PEACE, MY DEAR HUSBAND...

Robert L. Moore, 82, of Concord Twp., passed away April 18 at Tri Point Medical Center. He was the founder and president of R.L. Moore Homes Inc. and built many homes in the Lake-Geauga area before retiring in 1998.
Born in Chardon, he lived most of his life in Concord. He grew up there, raised his family there, and based his business office there. He participated in many community projects and willingly devoted time, materials and/or expertise to township officials when asked. He served in the Concord Volunteer Fire Dept. in the 1960s and was an active member of the Parent Teacher Community Club of the old Concord Elementary School until its closure in 1982.
A supporter and fan of Concord Community Days from its earlier years, he also sponsored the Concord 5K Run in the early years of that event.  In 1981, the committee named him as Grand Marshal of the Community Days parade, in tribute to his "community spirit and efforts."
In 2003-2004, even after four open-heart surgeries, he summoned time and energy to act as the unpaid leader in renovation of Concord's historic Old Stone School, during which he also enlisted help and donations from friends and businesses to hold down the cost of the project for the community.
In 2004, he was chosen Concord's Citizen of the Year "for his dedication, devotion and volunteerism and his demonstration of integrity, commitment and leadership."
As devoted as he was to his business and community, his family was the most important part of his life. He was a loving husband, father and grandfather; and a loyal friend.
He is survived by his wife Rose, whom he married in 1960; sons Mark (Christine) of Hambden, Bryan (Karla) of Bremerton, WA; and Kevin (Kimberly) of Huntsburg; grandchildren, Maddie, Katie, Jenna and Bob, his sister, Vivian (Robert) Montgomery of Thompson;  and many nieces and nephews.
He was preceded in death by his parents Otmer O. and Blanche Moore; and brothers Dennis, Olden and Donald.
Funeral services 12:00 PM, Monday, April 24th at Spear Mulqueeny Funeral Home, 667 Mentor Avenue in Painesville, OH.
Calling hours 12:00-3:00 pm, Sunday, April 23rd at the funeral home.
Interment in Concord Cemetery. 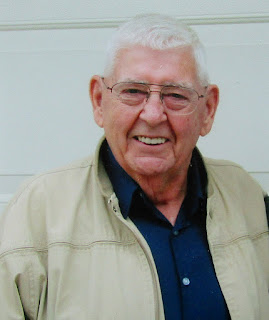 Posted by roseabouttown (Rose Moore) at 5:19 AM