IT SEEMS LIKE ONLY YESTERDAY, when I was a younger Rose in a pre-9-11 world, that I half-heartedly declared myself a write-in candidate for President of the United States. Readers of my Gazette Newspapers column had some fun with that, and several said they even saw my platform on the Internet. (That amazed me, since at the time I wasn't even ON the Internet).
And what was the outcome of that self-nomination? I lost by a landslide! Every voter in America, including me, chose someone else! 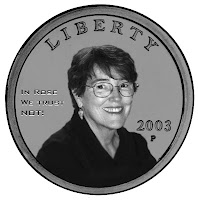 *As President Rose Moore, I would choose my cabinet and appointees without regard to black, white, red, green, polka-dot or any other color; male or female; pure-blood or Heinz 57; old or young or in-between... The ruling criteria for my selections would always be based on ability, experience, character, and love for country and its founding principles.
*I would deem all people born in this country, to legal U.S. citizens, to be Native Americans.
*I would champion "plain English" as the national language and would encourage its use in all legislation.
*I would seek a tax penalty for all eligible Americans who don't vote.
*I would call for a tax credit for those who serve on juries, and I would switch the jury-selection pool from the list of registered voters, because many non-voters don't register for vote because they fear being chosen for jury duty. For that and other reasons (such as a larger jury pool) choosing juries from the licensed drivers' list would make more sense.
*I would function as your president, not your mother. I would not attempt to engineer your way of living. I wouldn't tell you what to eat or drink, and I wouldn't raise your children, tell you HOW to raise your children, or reward you for having OTHER people raise your children...
*I would push for election revisions to require President and Vice President to run separately... I would give the Vice President real work to do so he or she could be ready for my job if I should die, resign, lose my mind, run away or go to jail.
*I wouldn't criticize or penalize the rich for being rich, or the poor for being poor. I'd stand for equal opportunity for all Americans to pursue their dreams...
*I would lighten up and encourage YOU to lighten up. In my communications with you, I would share the positives as well as the negatives, and I would not peddle fear for political gain.
*I wouldn't use the people's time or money, or the people's White House, to work toward my future re-election. A simple "Moore!" or NO Moore!" at the voting booth would be enough to keep me in the White House or send me home.
*I would put America first, every single time!

WHY I WON'T RUN for President this 2012 or ever in the future:
I couldn't be elected or even nominated. It would take a person far beyond my own capabilities to build a viable political constituency. In these days of political correctness, we are splintered in too many directions and, in dealing with each other, we no longer look for what is in the heart; we look for TROUBLE!
I am 72 years old this 2012 election season, and I'm growing older (so they say). That makes me too old for the young vote; too young for the old vote; too strong-minded for the old-fashioned women's vote; too traditional for the feminists' vote; and not electable for countless other reasons...
I don't feel old, but I have mellowed appropriately into my years and have gained an appreciation for the small good things around me. I have no patience for whining, bickering, infighting...
I couldn't stand the scrutiny and loss of privacy; I would have to give up my intrinsic informality and my Wild-Irish-Rose impulsive ways; every word I said would have to be carefully thought out for unintentional hidden meanings that might dog me all my days.
I wouldn't want to have to take the Secret Service or the press along for an x-ray or a colonoscopy...
And I could not ever leave my country life behind. Be realistic, after all:
Could you imagine a zoom-lens news photo of your President in garden boots and gear, joyfully sinking her gardener-hands into the soil of the White House rose garden... Sitting barefoot with her husband on the front porch of the White House... Stringing wind chimes in the trees around the White House... Mowing lawn on an old green garden tractor "because it is her favorite thing to do?"...
And could you accept an early-morning photo of your President, walking sleepy-eyed and tousle-haired with her big dog on the green lawns of the White House, with that same dog snarling at the Secret Service on his Mistress's behalf?  ...

(And who could ever tell her what to do?)
Posted by roseabouttown (Rose Moore) at 3:14 PM