FROM MY JOURNALS--CAROLINA AND THE "WRIGHT STUFF" AT KITTY HAWK

This would be the day! With my sister Mary and my husband Bob--and with Mary's son Bill as our chauffeur--we headed from Virginia Beach to North Carolina to finally meet up with "Uncle Willie Dough"---in the form of a life-size statue at Wright Brothers Memorial Park at Kitty Hawk. Not until the autumn before, in a visit with my Carolina cousin Rachel Dough Smith, had I learned of a family connection with the historic First Flight of the Wright Brothers.

In 1901, Willie St. Clair Dough had become a surfman at the Federal Life Saving Station at Kill Devil Hills. He and the men of that station befriended the Wrights and kept them supplied with food and any help and supplies they might need as they worked in preparation for that historic flight. The Wrights would later write of the surf men as "hospitable and indispensable." (The Stations later evolved into the U.S. Coast Guard, and its entwined history with the Wrights at  Kitty Hawk is well recorded in Coast Guard archives).
On Dec. 17, 1903, the day of the flight, the Wrights raised a pre-arranged flag as a signal to the surf men that help was needed. Willie St. John Dough was one of three who answered the call. (Willie helped to push the plane into place for take-off and pushed it off the rail for take-off from the hill).
Later when Wilbur and Orville Wright returned to North Carolina for further flight experiments, Willie continued to help. The two became friends, and in 1907 Willie actually settled the name Wilbur Wright Dough on a newborn son. Later he testified before a Congressional Committee as to the details of the First Flight, and in 1928 as a witness and survivor, he helped to lay the cornerstone of the Wright Brothers Monument at Kitty Hawk. He died in 1931.

On our sunny afternoon at Kitty Hawk in June 2011, Bob and my sister and I, with my nephew, frolicked around the park like little kids, knowing full well that this idyllic weather was far different from the harsh day when Wilbur and Orville had changed history. Before we left, we spent time in the museum there to learn the details of the significant achievement that had taken place at Kitty Hawk---basically, the birth of aviation!

FROM THERE WE DROVE TO VISIT WITH my cousin Rachel and her daughter Donna Smith Rose, but the pajama party we had planned at the big old beach house did not materialize. Donna and her family live and operate a commercial fishing operation along the beautiful Albemarle Sound, in a section designated as "Old Fishing Village," and the women were in the middle of the 24-hour work-days that surround the busy soft-shell crab season.
The Rose Family product is shipped to many places up and down the Atlantic Seaboard. Although soft-shell prices had collapsed that year, due to competition from Asia, the season was fortunately producing a record harvest for the Roses, and the family's financial bottom line would be maintained despite the extra work.
At Donna's place, we got some lessons in the work they do, and we were served what the women called "a left-overs lunch" which included freshly fried crab, barbecued chicken, corn bread, homemade dessert, and that southern staple---sweet tea. Donna later escorted us to the waterside to photograph our visit for posterity.
From here, we Three Amigos (as Bob and I and Mary had dubbed ourselves) returned to "Beauty and the Beach"--the beach house we had rented in Sandbridge on the seashore in Virginia. We fully expected to enjoy more sunny days there.
That evening we sat above the slip of water that would allow us to maneuver the resident canoe out into the waters of the Chesapeake Bay. As we watched a heron fishing patiently, we lazily considered all the possibilities of that canoe excursion.
WHEN MORNING ARRIVED, our well-laid plans were changed when we discovered a shocking sewage back-up had occurred in the night! The management company offered no replacement rental, though they did assure us we could sleep there and they would "fix the pipes by evening and clean up the mess in the house tomorrow."
For us, that was far-from-acceptable. Beauty and the Beach had lost all her appeal, and Mary wryly renamed it Beauty and the BEAST---beauty for the setting, beast for the house itself. Bob and I quickly packed up and headed back to Ohio, after driving Mary back to her home in Williamsburg, Virginia.
We had packed a lot into our time together, but we'd also left some things undone. Superstition says that leaving at least one thing undone will draw you back again. And we prayed that would be true. 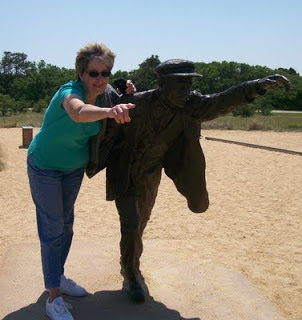 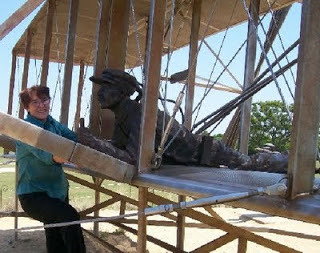 Posted by roseabouttown (Rose Moore) at 9:49 AM