THIS TRIBUTE TO DAVID H. BURRIS IS A RE-PRINT OF ROSE MOORE'S COLUMN APPEARING DEC. 31, 2015 IN GAZETTE NEWSPAPERS 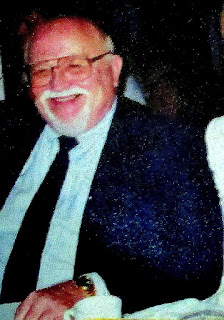 DAVID H. BURRIS of Concord Township--known to his friends as "Dave" or "Burris"--was laid to rest on the Friday before Christmas.  His Celebration of Life was held at Painesville's First Congregational Church, and that historic and spacious building was filled to the brim for the service.

News of his death had brought statements of sadness from a great many places and included students whose lives he had touched as an art teacher for more than 33 years before his retirement in 1991.                     He had also served as Painesville Township Riverside High School sports announcer for football, basketball, league track meets, wrestling matches and more.
He was organizer and four-year advisor of the school's Post Prom Party; spent decades doing stage scenery and makeup for school drama productions; was yearbook advisor and business manager for the yearbook and co-chair of several successful levy campaigns...
He chaired Tri-County student art shows; was involved with the school-and-community advisory committees and Parent Faculty Clubs; coordinated Senior Breakfasts; served as Student Council advisor; organized and was seven-year supervisor for the school's bloodmobiles, and more!
EVEN AFTER HIS RETIREMENT, Dave's middle name seemed to be "Service," and that service extended where he saw the need.
He worked with the Red Cross as a five-year committee chairman of the North Shore District Blood Services and served with its Volunteer Committee and Regional Advisory Committee, and was its Lake County Board Initiator and Coordinator of Painesville Elks public bloodmobiles...
A few of us knew he was a regular apheresis donor at the Red Cross Blood Center in Cleveland--which means he was among the few people willing to do this, going monthly for tests to determine platelet count for clotting factor, filling out forms and submitting to the two-hour collection process to help with treatment of victims of burns, cancer and aplastic anemia.
As producer of the Painesville Elks benefits for children, he directed two 20-act (hilarious!) variety shows. He judged regional students' art shows and was a president and 20-year member of the Lake County Education Federal Credit Union...
He worked with the Concord Community Day Committee as vice chair plus auction and food chair; worked as a volunteer for Morley Library; and was a winner of Concord's prestigious annual Citizen of the Year award...
TO HIS LEGION OF FRIENDS and admirers, celebrating Dave's life on a date so close to Christmas seemed more than appropriate. In his heart, Dave held the spirit of Santa, filled as he was with affection, good humor and generosity.
The difference between Dave and Old Santa himself was that Dave was present all year every year. And where Dave was present, his fine spirit reigned, to everyone's benefit.
Humor and joy and good memories highlighted his memorial service. As officiant, the Rev. Thomas J. Cofer admitted  he was introduced to Dave's irrepressible and sometimes irreverent humor when he first became pastor of First Church Congregational. He laughed at the memory of Dave introducing himself with the words, "I have underwear at home that's older than YOU are!"
"The Burris" could be serious when he needed to be, but humor was his hallmark. He used it as a prescription and balm. He would generate humor to uplift or encourage or to just plain bring joy.
AS A CHURCH FULL of people said goodbye to our friend, we were surrounded by memories of that special gift! At one point, my friend Connie Luhta leaned over and whispered to me with a grin on her face, "If I had the nerve, I would stand up and loudly declare, 'I never liked you, Dave Burris!' "
She and I laughed at the thought, for we both knew his friends would instantly recognize that as one of Dave Burris's expressions of affection.
When you hosted Dave Burris at your home, you knew those words would often be part of his ceremony of departure at the door. You would find yourself enveloped in a big Burris bear-hug along with those words--"I never liked you!"--loudly delivered, and quite heartily. And you knew he was declaring his friendship.

REST IN PEACE, David Burris. "We never liked you!" (And you know we will like you forever).

(Our columnist Rose Moore can be reached at randrmoore@gmail.com)

IMAGE OF DAVID H. BURRIS (attached) is a personal photo that hangs on the Moore refrigerator door, as it has for many years.
Posted by roseabouttown (Rose Moore) at 5:22 AM