GOOD MORNING FROM AN EARLY-RISING ROSE AND HER DOG...

What a lovely copper sunrise! I would not have seen it had I not risen before 6 a.m., and that was not by choice. For that, I thank my four-legged alarm clock. (Yes, I took the time to thank him). 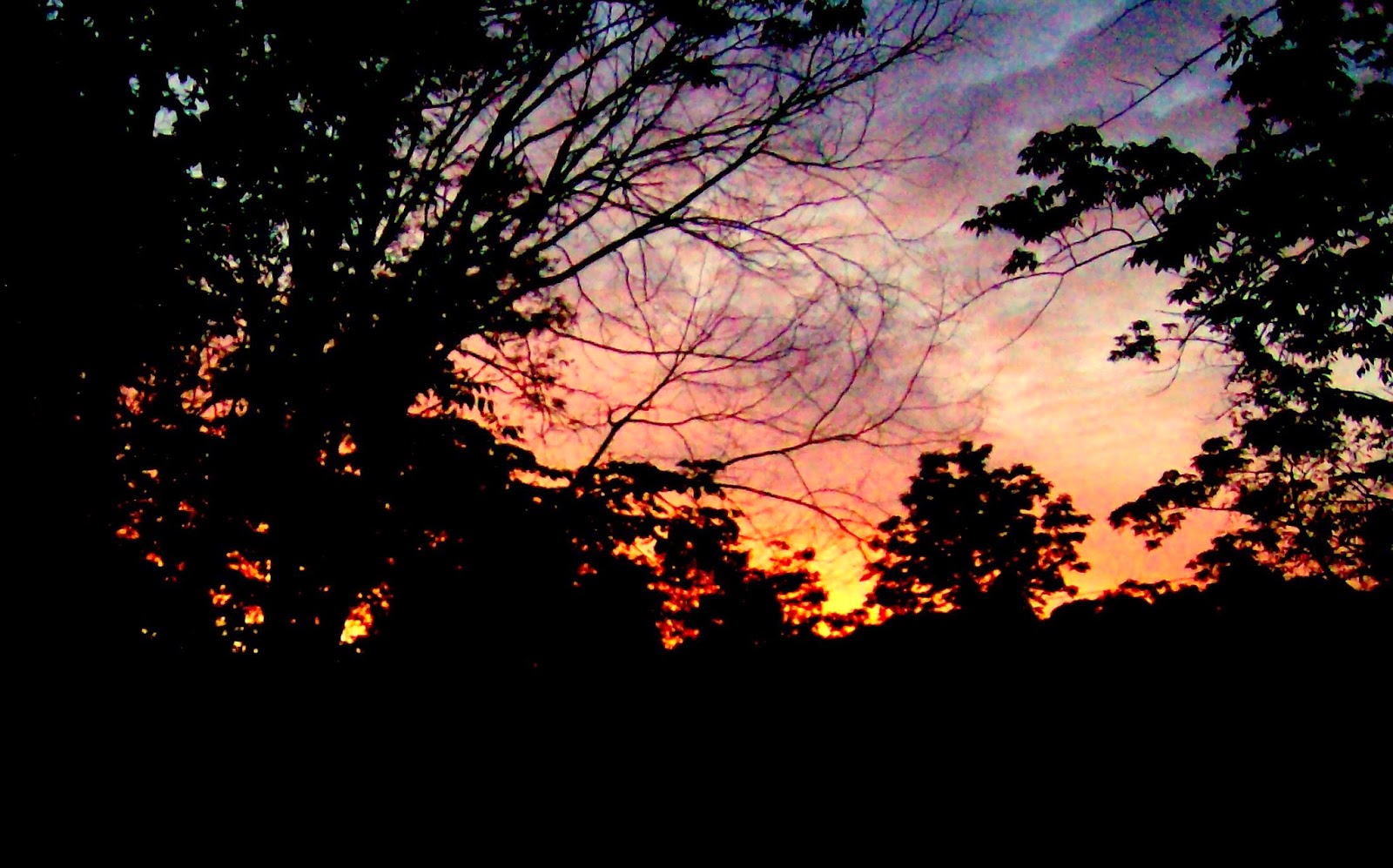 The first color pierces the darkness..

And then the sun pops through!

Posted by roseabouttown (Rose Moore) at 8:47 AM

Amazing how the perennial plants respond overnight to a bit of coolness and protection for their roots, in the form of mulch around their feet. And amazing too, how good it feels to the gardener that someone ELSE has done that heavy work! And now begins the fun for me. As Tom Sawyer said in Mark Twain's classic book, "If it's fun, it ain't work!"
Posted by roseabouttown (Rose Moore) at 8:28 AM

Several companies are working on cars that don't need steering wheels or brakes or accelerators or humans' brains and efforts...

Why not? We are doing progressively less and less for ourselves as time goes on...

We are subcontracting the care and raising of our children too...

Why not subcontract our driving?
Posted by roseabouttown (Rose Moore) at 1:51 PM

AN AGING FLOWER CHILD REMEMBERS SEWING AND THE COUNTY FAIR 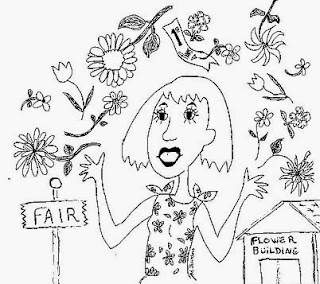 Every year when our county fair comes around, there has bloomed in my mind the memory of an embarrassing project I entered for judging at our fair in 1954.
Prior to that summer, I had signed up for a 9th-grade sewing class. I soon discovered sewing was not, and never would be, my field of talent. But once begun, my mother firmly said, I was to see the classes through.
Surprisingly, when summer came, I made a bright sun dress to enter at the fair. Perhaps I figured it would serve as proof I had seen those classes through to the bitter end.
On opening day, as I waited for my friends to arrive to accompnay me to the fair, I took a last look at the dress. With new-found clarity, I saw the truth---I had butchered all that splendid floral fabric!  I had lost my battle with my mother's old-time, out-of-sorts and out-of-repair, treadle-style Singer sewing machine
In truth, however, I knew that poor machine was not responsible for my own shortcomings. My seaming was unprofessional; the detailing was minimal and far from perfect; and the shoulder ties were less a style choice than my way of overcoming fruitless efforts at making sleeves. Even in the muted shadows of the fading afternoon, I could see my dress would not stand up to judging.
My friends, all talented seamstresses, had loyally supported me. But I had seen their work and I knew their entries would have been enough for royalty. In despair, I asked my mother, "Can I just forget to take the dress?"  I envisioned shame and ridicule. But once again my mother said a project, once committed, must go through.
Pointing to my flower garden, she suggested I also take a second category for the judging. But was there time? "You have some minutes left," she told me. "Do what you know."
I hurried to  the flower garden that always gave me joy, clipping this and snipping that until my arms were full. Then from a shelf I took my mother's favorite vase---a graceful, patterned Grecian shape in lustrous black. And contemplating vase and flowers, I followed my creative impulse.
My bright bouquet had all the beauty of a sun-drenched wildflower field, and I dropped the brilliance of the flowers into the darkness of my mother's vase. Plunked in place without design or preparation, they smiled back at me, and I liked the daring carelessness of what I saw.
As for myself, I felt a little dashing, too, as I headed to the fair with my expert seamstress friends and their creations. My hopeless dress, draped across my forearm, was a backdrop for the flowers I was cradling.
My flowers took First Place and won a lot of praise. For just a moment I felt guilty, as if my mother's handsome vase had won the prize. Then I thought of all the love and labor I had put into the garden that produced the blooms. Like my gardens, those blooms reflected some of what I loved and what I knew.
I wasn't wrong about the dress. It didn't win a ribbon, and I cringed to see it on display among the rest. I quietly removed it and took it home, and I often used it for a work dress for my gardening.
In later years I warned my husband when he proposed to me, to "Withdraw the question if you think I'll sew for you." And still he wanted me to be his wife.
Through all our married years since 1960, his vegetable gardens have been interspersed with flowers by a wife who doesn't care that they're not edible...
His summer rooms have welcomed flowers from the gardens of a wife who isn't gifted with a needle...
As for embroidered masterpieces, he has had to be content with small love poems on his pillow, from a wife who knew and loved her writing and her flowers but didn't give a snap for sewing...
And when his socks would sprout a hole, he has had to learn to throw them out and purchase new ones. His wife was busy in the garden!
He can blame it on the fair!
Posted by roseabouttown (Rose Moore) at 11:13 AM