STORY OF A SPECIAL SANTA.... 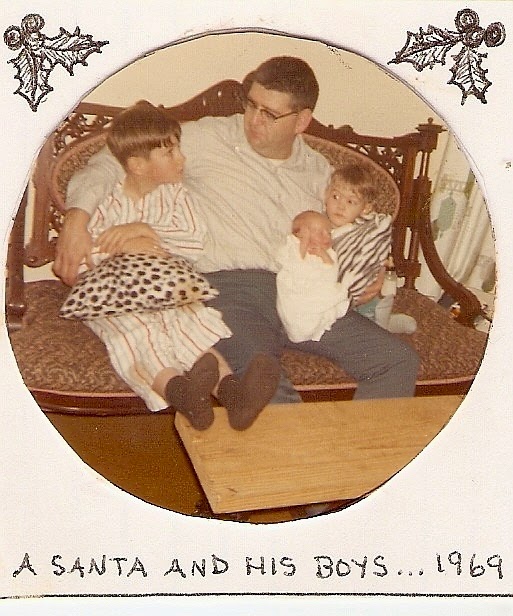 
OUR MODERN VERSION of Santa Claus---St. Nicholas, Kris Kringle, Father Christmas or whatever else you choose to call him---was built around the giving nature of the season. Over centuries he has grown in our imagination as a jolly gentleman of Christmas, with long white hair and beard, a bright red suit, and an airborne sleigh with reindeer.
My own favorite Santa doesn't fit that mold at all. He doesn't sport a beard and never has; nor has he ever worn long hair, though his perennial crew cut over time has turned snow-white.
He doesn't drive a sleigh with reindeer, though he has often had a friendly dog of reindeer size who traveled with him in a truck. And though my Santa does like red as much as any other color, it's never been his signature, and the Santa suit has never been his garb; he's happiest in work clothes.

WHEN OUR THREE boys were little children, times were often tough financially, and my Santa devised a lot of Christmas fun for them that money couldn't buy.
In the weeks preceding Christmas, footprints of Santa, elves and reindeer would mysteriously appear around the yard and house, compliments of Santa, who went into the cold of night when the world was sleeping, and made this minor miracle that brought such wonder to his children's eyes.
On December afternoons, he would help his boys stack piles of apples for the reindeer. Those apples would be gone by morning, and then it would be time to start again; oh, those hungry reindeer!
On a mid-December morning, he would take his boys out to the tree farm and let them choose the family Christmas tree for cutting. Invariably, they chose a tree that no-one else would want, a "tree that needed love." When it was time to stand the tree for decorating, these trees were guaranteed to give old Santa silent fits, with crooked trunks and most ungainly shapes.
Then there was the yearly "Boys' Night Out." In Christmas week, Santa and his boys would enjoy a meal on the town, then tramp around together while each boy sought his special gift for Mom. Here too, the small boy's choice was honored, with sometimes interesting results; for instance, how could I forget a small son's Christmas gift of "cowboy underwear?"
MY SANTA HAD an active North Pole annex at our house. On many nights before the holiday, the garage became a workshop where Santa whistled, sang, sawed, hammered, sanded, painted ... By morning, all evidence of Santa's work was cleared away before the kids woke up.
This shop created wonders. One year, with new parts and paint and lots of patient work, Santa magically transformed a discarded, worn-out bike frame into a brand new, shiny bicycle. To this day, Santa claims that project was a snap, compared to the year he purchased new-age Christmas bikes in packages fraudulently labeled, "Easy to Assemble."
For our first-born, Santa's shop produced a child-sized, upholstered "Santa Chair." This bright red, sturdy treasure got a lot of use and then was passed intact from oldest boy to youngest, and then passed good-as-new to another family's child.
From Santa's shop one Christmas, there even came a set of bunk beds. That Christmas night, there was a lot of giggling as Santa climbed into the upper bunk and snuggled with his boys as Mama read the nightly bedtime story. The bunk beds held his weight, it should be noted, and Santa fell asleep before the story time was over.
This home-grown workshop also created treasure boxes; wooden horses; wood cut-outs of boyhood favorites (such as cars and cowboy pistols); handmade and painted alphabet blocks; a carpenter version of Tinker Toys or Legos, with glue and nails, a hammer, and pieces of wood in many shapes and sizes ...
ONCE SANTA EVEN left materials and plans for a doghouse for the boys' companion, Buster. After Christmas, the little building was created by  my Santa and the boys together, with a shingled roof, real siding, insulation and a swinging door. Well built, that tiny structure outlasted Buster, and when Buster died, it became a marker for his grave; and the boys and I sat together on the doghouse roof and traded tales about our Buster and how much he had added to our lives.
In those simpler times, this Santa made small gifts seem like the best gifts, and his presentation was ingenuous. A wrapped box might contain a map for an "X-marks-the-spot" game that led to the real gift ... A pocket knife might be wrapped deceptively in a box inside a larger box, accessorized with wood for carving and a sharpening stone for after-Christmas lessons in whittling and sharpening.
ALL YEAR every year, my Santa blended into everyday society under the comfortable name of Bob. I first met him when both of us were young, and he has aged along with me. But in his heart and in my eyes, he's ageless; he has kept his Santa smile and spirit, and his eyes still sparkle with a boyish mischief.
For years now, our sons have been busy raising children of their own, and my Santa is retired. He has long since passed the Santa torch to the younger generation. Someday that generation too will feel a tug of sadness as they pass the Santa torch to yet another generation. And then, like us, they'll warm themselves each Christmas with their  memories of the best December jobs they ever had.

Posted by roseabouttown (Rose Moore) at 1:00 AM