LAW DAY BREAKFAST SERVES UP A SURPRISE FOR ME... 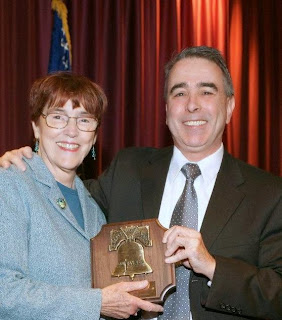 In the early morning of the first of May, more than 300 people gathered at LaMalfa Party Center in Mentor for the Lake County Bar Association's 38th annual Law Day Breakfast. In attendance, in addition to Bar Association members, were community leaders, public officials, representatives of law enforcement, and citizens from all walks of life.
I was there too, having accepted an invitation from my friend Connie Luhta to attend as her guest. I have attended the popular event many times, sometimes covering it for our paper and sometimes attending simply because I had become a fan of the event. I am one of many who look forward to the special awards, including the prestigous annual Liberty Bell Award.
That award, formally endorsed by the American Bar Association in 1964, has come to be seen as a symbol of Law Day itself and is presented to an outstanding community individual, a non-lawyer, for outstanding service along various lines.
The Lake County Bar Association goes to great lengths to keep the chosen recipient a secret until it is announced and presented at the Law Day Breakfast. Apparently they do a great job. As attorney Michael Lucas detailed the history of the 2014 recipient, I was startled to suddenly realize it was ME!
I turned to Connie Luhta and whispered, "Oh! Bob would have so wanted to be here with me!" She informed me he was, along with my sons and their families, purposely hidden somewhere among all the people. (And here all along, I was sure my husband was at home fast asleep in his bed while I was at breakfast. What kind of a newswoman am I, to be fooled by so many?)
Over the years I have greatly respected the Liberty Bell award and what it stands for, and I was deeply honored and very moved to know that my name would now stand among the 37 other Liberty Bell winners---one each year for the past 38 years. Good company for sure.
LAW DAY ITSELF is a long-standing celebration, though it's not as old as I am. I was a senior in high school and about to graduate in May of 1958 when President Dwight D. Eisenhower established it, proclaiming that, "Henceforth, May 1st of each year will be Law Day in the United States."
Three years later, it was reaffirmed and codified into Public Law by Congress, as "a special day of celebration by the people of the United States, in appreciation of their liberties and the reaffirmation of their loyalty to the United States and of their rededication to the ideals of equality and justice under law."
And soon Law Day was being celebrated all over the country by local Bar Associations, and it is still ongoing, with the Liberty Bell Award as a centerpiece of the event..

(Columnist Rose Moore can still be reached at randrmoore@gmail.com. Perhaps we, her friends at Gazette Newspapers, should now refer to her as our "Liberty Belle.")
Posted by roseabouttown (Rose Moore) at 8:37 AM