SOME BIRTHDAY MUSINGS...
*I was born in 1940 in a hospital that in recent years was torn down to make room for something else.
*I was baptized in a church building that had been attended by generations of my family. It was razed in the 1950s and replaced with a new one.
*I attended a Catholic grade school that is now closed for all seasons.
*I shopped in a downtown that now is mostly gone, a large part of it having been replaced by county buildings and parking lots.*
*I graduated from a classic high school building that was demolished, and a new high school was built on the other side of town.
*My graduation was held in an attractive old theater that was taken down to make way for a drug store.
*I spent many a childhood Saturday morning in a reading room of a heritage building that was our public library. It too has disappeared from the scene, in favor of a newer building...
All this makes me want to pinch myself to make sure I'M still here and haven't been replaced to make room for something newer in the world!... (YET?)

Posted by roseabouttown (Rose Moore) at 5:48 AM

August 06, 2013 is my birthday. It's also the time of the New Moon, also known as the Dark Moon.
The moon won't be visible to my naked eye, because this is the moment when the moon reaches its MINIMUM brightness, situated between Earth and the Sun, in conjunction with the Sun as seen from Earth, with the dark (unilluminated) portion of the moon facing almost directly toward Earth.
Visible or not, I do know the moon will be there---thanks to a childhood birthday story told to me many years ago by an elderly neighbor.
She described the moon as a giant eye in the night sky, and every month it would choose one child's birthday, and it would close its eye and darken it in one long "wink," to acknowledge and honor that child's special day. On that night, she said, I was the birthday child who was chosen for that honor. And I believed her.
I later learned the astronomical explanation for the Dark Moon, but I never did let go of that old woman's magical story---fabricated just for me, the birthday girl.
All these years later, I remember this kind woman, and I still love her story. And it hasn't passed my notice that my birthday again falls on the Night of the Dark Moon.
Happy birthday to me!
And thank you Mr. Moon.
Posted by roseabouttown (Rose Moore) at 4:37 PM

MOURNING THE PLAIN DEALER AS WE'VE KNOWN IT...

Years ago when I was young, an elder woman cautioned me, "Life is change. And when you find yourself harping about changes, you'll know you're old."
I recognized her wisdom and remembered it. In fact, I often quoted it.
Now, days before my 73rd birthday, today is the last day for standard delivery of the Plain Dealer newspaper I've been receiving daily for close to half a century.
I'm very sad about the change; in fact, I'm harping about it...
Uh-Oh... Am I finally old?

If so, why am I not FEELING old? Only sad.


(Photo taken by me from across the room, on this Sunday morning, Aug. 4, 2013, as my husband and I lounge with our Sunday Plain Dealer) 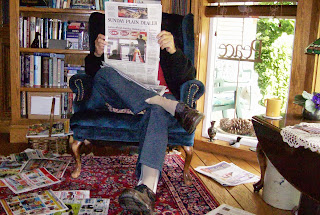 Posted by roseabouttown (Rose Moore) at 9:39 AM