roseabouttown (Rose Moore)
A RETIRED NEWSWOMAN, I live in a scenic creek-valley in a semi-rural township in northeast Ohio. Topics and frequency of postings are according to my mood. My mood is usually upbeat. I value my friends and my family; they are a treasured part of my life.. (DIRECT BLOG COMMENTS TO randrmoore@gmail.com) I

THE GOLDEN YEARS OF CONCORD AIRPARK... 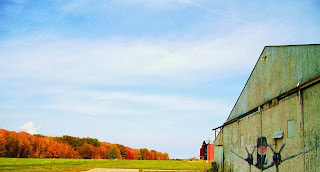 Often when I pass the old Concord Airpark, memories roll along the runway of my mind, transporting me to what so many of us refer to as the Airpark's "golden days." I was but one of the lucky folks who "knew it when."

I learned to fly there in the 1960s, and my husband and I and our then-only-child Mark spent a lot of time there. I met Connie Luhta through that small airport, and she became one of the great friends of my lifetime.
The airfield was alive with the  activity of people, planes and families. The late and great Adolph Luhta was the operator, and every year or two there was an air show there which was as much fun as any of the big professional events; maybe better!

I often ran the airport's ground-to-air radio. I was also a member and treasurer of the airpark's social club, The Skylarks, which planned the airshow, potluck socials, hangar dances and any other activity the group could think of to play host to pilots and their families.
It seems the airport had a great flock of friends among its neighbors too. Many of them, in fact would drop in to say hello and watch the planes, particularly on the summer Sundays when the two resident Stearman biplanes were engaged in "dog-fights" high up in the morning sky.

I have a special memory of a certain winter holiday dance at the Airpark. Though Adolph groused beforehand about having to clear the hangar for the occasion, we all knew that was mostly his usual "gruff bluff." On arriving at the dance, no one was really surprised to see that he had thoughtfully installed an attractive tent-like walkway from the office to the hangar, to keep us out of the cold.

The walkway and hangar were lit up like a Christmas tree, and when we walked into the dance, it was plain to us that Adolph had worked hard to make things hospitable, party-hearty and warm for his guests. He was a great host; he had even taken care to see that the big juke-box was stocked with just the right music for good dancing. And, as I recall, he also made sure he danced with every woman there! A burly man, he was nonetheless light on his feet, and an excellent dance partner.

In summer afternoons, evenings and weekends, the airpark was a magnet for all kinds of people---not just pilots and flight students and instructors, but neighbors and other visitors who drove in or walked in to sit outside on the metal glider or a fence,  watching take-offs and landings and socializing with the airpark's staff and regulars.

In any season, the airpark lounge was always a place where old pilots could sit and share a bit of "hangar flying"---(the aviation  world's version of "fish tales.") There was often an assortment of non-pilots too, and they were mostly there for the fun of listening to the wonderful malarkey.

For the past 20 years, I have lived down the road from the airport, and I pass it quite often. Its caretaker is my friend Connie Luhta, Adolph's widow. Though the airport is mostly quiet these days, Connie occasionally holds a picnic at the old hangar or a gathering at the old lounge (which also serves as home base for an Experimental Aviation Association chapter).
The land is still pretty, especially when draped in the colors of autumn, but the buildings---like many of us old airpark denizens---are showing the effects of the passage of time. That doesn't keep my memories from bringing back to me a vision of the airpark's golden days, and that makes me feel briefly young again.

(If any of you care to share old photos or memories of those days, I will happily receive them at randrmoore@gmail.com)
(Photo 2013 by Rose Moore--"Autumn in the Back Fields, Concord Airpark in northeast Ohio")

COMMENTS:
FROM SUSAN LUHTA PRICE OF ALABAMA: "Oddly enough I have a memory of the Airpark.  Well, actually I have a memory of being high up over the Ohio landscape in a small plane owned by Harvey Luhta.   My Dad, Mama, my brother and I got to take a ride  while we were in Ohio for a few months when I was about 4. It is one of the few memories I have of Ohio, this one and I have a picture in my head of the yard at Harvey and Lois’ house and the entire area as far as my little eyes could see was white.   I guess I have two of the best memories you can have of Ohio, the patchwork quilt I saw flying over it and the beauty of it covered in a blanket of white.
Posted by roseabouttown (Rose Moore) at 10:10 AM