WILL THE WORLD GIVE UP ON NEWSPAPERS?

"The reports of my death have been greatly exaggerated," wryly wrote the early journalist, Samuel Clemens (Mark Twain) in the 1800s, as he squelched the widespread rumors that he had died.
Clemens might have laughed as well at the off-and-on reports ever since, sounding the death knell for newspapers themselves. But newspapers are still with us.
The most credible predictions of their death have been more recent, as newspapers have been competing with electronic journalism, and even competing with their own print publications by simultaneously publishing their news on-line.

And now, as I write this, my Cleveland morning daily, the Plain Dealer, is about to switch to three-times-weekly delivery. Subscibers like myself will have to get dressed and go to town to buy the in-between printed editions, or get their news on line. Groan... (I am a creature of habit, and reading my newspaper over coffee each morning, in leisurely fashion, is one of my favorite habits).

I hope I never see a time when there actually ARE no newspapers; I love them and I always have. As a child, I loved them so much I decided even then I wanted to be a newspaper woman.
I started on that road officially in the 1950s with the daily Painesville Telegraph, which sadly is a newspaper that did die, after reaching the pinnacle as the oldest of Western Reserve newspapers.
The news world in which I began in those "old days" placed a big Crown Graphic camera in my hands, with its heavy battery pack around my shoulders and large "film plates" in my tote bag. Unlike the "big city" news people, we doubled as our own photographers, and I loved that too. I saw my photos as another way of speaking.
Our news rooms of that era percolated noisily with the clang and clatter of linotype and teletype machines, the clunk-clunk-clunk of manual typewriters, the whirr of photo-engraving machines, the incessant ring of desk phones and the comfortable cocoon of human voices...
The mammoth presses, when they were running, seemed to own the building; we couldn't sense our heartbeats above the roar. We had stringent dress codes, yet our sleeves were ever-soiled with the grit of carbon and metallic dust. What was not to love?
At no time did I regret that I had chosen news. There were sad and tragic moments to be sure, but you could meet those moments carefully, and in the process you could grow, and sometimes even be of help or comfort.
And in what other line of work could I have shared words with a rock star, symphony musician, beachcomber, pro athlete, auto racer, bridge builder, sharpshooter, politician, actor, astronaut, stunt pilot... the proverbial "doctor, lawyer, Indian chief"... and an infinite variety of others?
I walked and talked with organ donors and receivers; documented flood and fire and accident; lent my shoulder to a mother whose child had died on the highway...
My camera caught the gleam of a teenage beauty queen, and the gnarled fingers of an elder teaching a young boy how to tie a knot...
I wrote of hearth and home and garden; dined on Great Lakes freighters; tasted homemade cookies in a Coast Guard station; wept with searchers as they pulled a tiny body from the lake; sat through smoky council sessions; wired stories home from distant places...
In more-recent years, I came into the best of places for an aging news hen like myself---a chain of weekly papers. I learned that weekly papers really care about the local.
They print my words in black ink on a newspaper page... Far more personal, in my mind, than words across an electronic monitor. (And unlike the TV news, the words don't holler out at you).
I don't believe the world will ever give up on newspapers; not completely. The other day I found a little bit of proof. Over coffee with a morning paper, I read about a printed version of an electronic journalistic blog, to be culled from the internet and distributed---you guessed it---in the form of a newspaper page!
(You can direct comments to Rose Moore, devoted forever to newspapers, at randrmoore@gmail.com.
ATTACHED PHOTO by Rose Moore
CUTLINE: "There's nothing like sitting at the table in the morning, with your head buried in a REAL newspaper. I have noticed that even my very modern son Bryan, when he visits from the west coast, starts his mornings with coffee and a newspaper!"---R. Moore 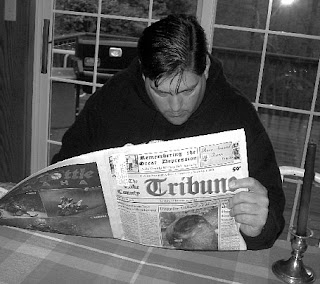 Posted by roseabouttown (Rose Moore) at 8:16 AM