Flag Day was the theme when, by invitation, I delivered this address to the New Connecticut Chapter, Daughters of the American Revolution, for Flag Day 2012. I share that same message with you today: 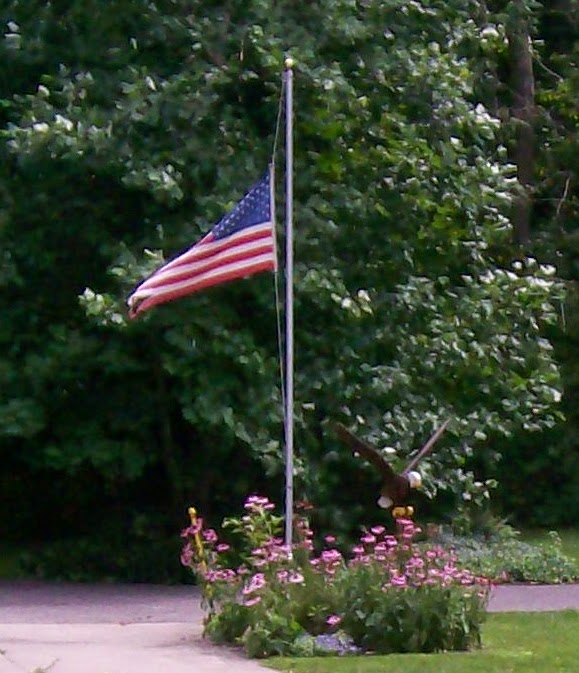 I am, and always have been, a flag-flying patriot. Over time, it seems there have been some periods when some segments of our society have not seen that as "cool." That didn't matter to my husband and me; it never has and never will. We will fly the flag until the day comes when it's physically impossible for us to do so. And then we'll find someone to raise and lower it FOR us, and replace it when it needs to be replaced. Those "someones" will no doubt be our sons, for all of them fly flags outside their own homes, on flagpoles as we do.
For me personally, I don't know exactly where or when this love for flying the flag began. Perhaps it was the prominence of the flag in my 1940s childhood, when every day at elementary school began with the Pledge of Allegiance... Or perhaps it began with my own family's patriotic ethic... Or perhaps it began with my hometown's annual Flag Day parades, which were large and well-attended.
Those parades stepped off at our local high school. Along the way and through the downtown, the streets were always deeply lined with residents of all ages, waving small flags that had been given to them by whatever organization was responsible for that.
Today in America, it seems the large yearly Flag Day parades have gone by the wayside. But we do, in a way, have somber versions of a flag parade. After our citizens learned their lesson from the shameful treatment given to soldiers returning from Vietnam, dead or alive, today's fallen heroes are saluted by great crowds of people holding flags along the route to the local hero's funeral and burial.
These parades, unlike our Flag Day parades of yesteryear, are not exuberant and joyful. But they are quite moving in the intensity of feeling as the funeral possession bears the fallen to his or her goodbye. Huge flags are raised over roadways in the hero's honor, suspended from aerial ladders by local fire departments; and people line the right-of way, coming in from homes and side streets with their flags, to bear respectful witness to the sadness of the loss.
IN A DIFFERENT MOOD, I am happy when I see an unexpected and unscheduled show of respect to the flag that represents our country. One example took place two years ago when an area tree service was taking down four large, dangerous trees on our property. Our flag and flag pole did not seem to be in harm's way while they worked, yet I watched as a team member called a halt to the work so that he could remove the flag and flag pole to a safer place.
A tall and sturdy man, he pulled the pole and flag vertically out of its concrete foundation. As he walked, he kept the pole and flag carefully upright. As he set it against a sheltered corner of our house, I heard him say quite gallantly, "I am sorry, Old Glory, to disturb you in this way. I will return you safely to your special spot when our work is done." (He did do that, and just as carefully).
Another example was more recent, when a friend and his beautiful little airplane arrived to meet us at a small airport in our neighborhood. The plane itself was like a flag. It was artfully painted in stars and stripes and documentary tones of our Red, White and Blue American banner.
At departure, our friend the pilot treated us that afternoon to a small and skillful demonstration of his aerobatic talents, and the patriotic pattern of his little plane against the bright blue sky seemed to be itself a happy tribute to the flag. We felt like saluting, and I'm sure that was the desired effect.
SOMETIMES I FEEL ANGER at the manner in which our flag is treated, such as:
*Hearing on the news about a deed restriction forbidding a veteran from flying his American flag. As the homeowners association chairman pronounced, "We have people living here from other countries and other cultures, and we don't want to offend them."
*Or hearing that a town has lowered its flags to half-mast for the funeral of a celebrated singer whose death has been partly of her own doing. That, in my opinion, demeaned the flag-at-half-staff tradition.
*Or hearing a pop diva sing the National Anthem---our flag's and our country's own song---in a style that "makes it her own," as pop divas like to say. I grit my teeth at that. It is NOT her own; it belongs to all of us and to our country itself. It is a hymn, not a showpiece for the singer herself. It should be sung like a hymn, and the tune should not be mangled or the words forgotten.
WHICH IS ONE reason I felt such pride to listen recently as a young middle-schooler named Jenna Rose Moore was chosen to open a school concert with the National Anthem. Just as the music director said he had expected, Jenna stood respectfully; sang it carefully in tune and key; acapella and word-perfect, like the hymn it is, paying honor to our flag and country.
Admittedly, her talent was not inherited from me, her grandmother. But she had learned through home and family to respect the song and what it stands for. When she was done, the reaction from the audience made it very clear that they appreciated the meaning too.
TO ALL OF YOU, I say: God Bless America, where patriotism still has its fans, and a great many families are still passing it on.


A JTO TREE WORKER, REMOVING TREES ON OUR PROPERTY, CAREFULLY CARRIES THE FLAG TO A SAFE SPOT WHERE IT WILL NOT BE DAMAGED. IRONICALLY, THIS 'ONE-MAN PARADE' TOOK PLACE ON A FLAG DAY.