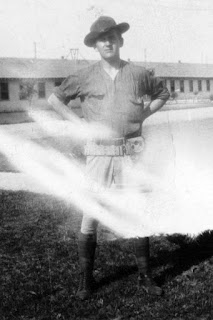 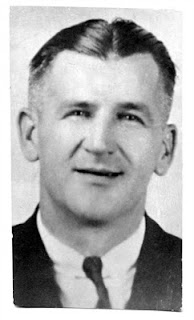 It was June 3 of 1940, 6 o'clock in the afternoon, when a three-place Waco bi-plane took off from the Euclid Avenue Airport in Willoughby, Lake County, Ohio. The field then was a haven for pilots and aviation buffs and people who just liked to watch the flying machines come and go. (Earlier known as the Willoughby Field, the commercial landing strip had opened in the 1920s, and sometime after World War II, it would be purchased by famous aviator Cook Cleland who would operate it as the Cook Cleland Airport).

Waving and watching, as pilot Michael Z. Gould lifted the Waco upward on take-off that afternoon, were his 30-year-old wife Elizabeth "Betty" Gould (nee Dvorak) and their 12-year-old son Michael Jr., who would wait at the airfield until their loved-one's return. The air field was familiar to the family. Betty Gould's husband Michael Sr. taught ground school classes there at Horn's Flying School, and also flew commercial flights from that location

Gould had borrowed the Waco to practice maneuvers for a test he planned to take to advance beyond his current Light Commercial rating. The plane itself was 10 years old and had recently been relicensed, inspected and certified as airworthy. It looked like a good day for the 36-year-old pilot, a foreman for Fisher Body of Cleveland. Who could know that Gould would be dead within the hour?

Not far away, witnesses would be watching along the highway as Gould executed his maneuvers over an orchard off Route 84, just west of Garfield Road in Mentor. Things seemed to be going well, and why not? Gould was known to have a good 16 years of flying experience under his belt (though it was later noted that he didn't have much experience in the type of plane he had borrowed for his practice).

After conducting a number of spins from an average altitude of 3000 feet, spectators were shocked to see the plane plunge suddenly into a vertical dive, roaring toward the ground, engine wide open. Gould had the required parachute aboard, but spectators say he bailed out at the last minute, too close to the ground for the chute to engage.He landed head-first, dying instantly a few feet away from the plane's
engine, which was driven three feet into the ground. There was nothing left of the fuselage itself but mangled metal. (Later, Gould's widow would become the wife of pilot Jerry C. Bouse, a flight instructor at the field, who was present the day of the crash).


A FEW YEARS AGO I learned about the long-ago air accident when I was contacted by Mike Z. Gould's granddaughter, Megan Gould Peterson of Pennsylvania, who had begun a family genealogy. In the process, she had learned about her grandfather Gould's tragic accident and wanted to learn more about the crash and her family. During her research, she had been referred to me as a local historian.

"My father never told us about our family members at all, not even his father," she told me. "Perhaps that was due to the trauma about the crash..." She was having problems in her research; she had hit a brick wall.

Having hit many "brick walls" myself in years of family research, I understood what she was up against. And because I had received a great deal of help from strangers during those years, I was happy for this chance to "pay it forward."

I had learned from Gould's granddaughter that Gould was a Punxatawney, PA native who had been married to his Betty for 15 years. The Goulds lived in northeast Ohio, and many family members lived here for a long time after Michael Gould Sr.'s death, residing in such places as Ashtabula, Painesville, Euclid, Fairport, Cleveland, Eastlake... Among the names Peterson had found were Marguerite Fitzsimmons, Joseph Gould, Veronica (Vera) Fitzsimmons, Conway Bailey, Frances Foster, Madeline Krell and Michael Z. Gould's parents Michael and Mary Zloty. However, with none of these was she able to make a firm connection.

Since then, with very little luck, I've passed Peterson's information far and wide among people I thought might have some memories of the aviation community at that point in time. Very recently however, I did discover, quite by accident, that Don Blakeslee of Fairport (along with William Morgan of Cleveland) had owned the borrowed airplane which Gould had flown the day he died. Aha! I did know who Blakeslee was!

HE WAS FAIRPORT'S own native son, Donald John Matthew Blakeslee, who became one of the greatest, if not THE greatest, aerial combat leaders of World War II. He was and still is regarded as "The Ace of Aces." Under his dynamic leadership, the Fourth Fighter Group (4FG) became the highest scoring group in the Eighth Air Force, though his career actually began as a pilot in the Royal Canadian Air Force.

In 1944, as Commander of an 8th Air Force Mustang Fighter Group, the Distinguished Flying Cross was personally presented to him by General Dwight David Eisenhower at a fighter base in England. Blakeslee and his group were also given a Presidential Citation covering a 51-day period from April 5, 1944 to May 24, 1944, as escort bombers on the first Britain to Russia shuttle mission...

In Korea, commanding a 27th Fighter Escort Mission group in 1951, he received the Legion of Merit from the USAF...

He retired in 1965 and died in 2009 in his home in Florida at the age of 90. In on-line research of tributes surrounding his death, I discovered several interviews in which he said he had entered the military as a pilot "in a strange sort of way." In 1939, he had saved to buy an airplane under co-ownership, and he had based and flown it out of the Euclid Avenue Field in Willoughby.

In 1940, he said, that plane was crashed when a friend borrowed it to practice for a test. "And so, in order to be able to keep flying, I applied to join the Royal Canadian Air Force." He was quickly accepted, in August 1940. That was less than two months after Michael Gould's accident, and  Blakeslee's statements seemed to dovetail with that accident; with the borrowed and destroyed plane; with the friend who had borrowed the plane to practice for a test...

In sharing this information with Megan Peterson, it seemed likely to both of us that her grandfather, Michael Z. Gould, was the friend whose plane crash had left Blakeslee without a plane and had led him to the RCAF.
In fact, Peterson had an artifact that seemed to draw her grandfather and Don Blakeslee together in another way---a RCAF cap pin which her dad had said belonged to her grandfather. Could Gould's undocumented military flying have been with Canada? Despite the lack of formal documentation as a flyer for the U.S., a photo does exist of Gould in Air Corps uniform. And many young U.S. pilots of that era did work with the RCAF, flying or training pilots.

Peterson seemed to find some comfort in knowing that a man who meant so much in defeating the German Luftwaffe in World War II might not have gone in that direction had he not lost his plane in her grandfather's crash in Mentor, Ohio on that fateful afternoon in June of 1940. If that were true, it would be as if a Master Plan had gone into effect, and things were meant to happen as they did, for an important purpose.

Meghan Gould Peterson has been intent in fleshing out her grandfather and his story and the story of his family. Any bit of information, or even a tiny memory about any of the people and places named in this column, would mean a lot to her, she assured me.

It could be that bit of information that would help her paint a better photo of her grandfather and his family. And it's often something minuscule (or a series of minuscule items) that leads to busting up "brick walls" in genealogical research.
Perhaps someone reading this column today can be the provider of such a memory or bit of information.

In all my years as a columnist for Gazette Newspapers, I've seen such miracles before, and I believe!
(Contact Gazette columnist Rose Moore at randrmoore@gmail.com)
ATTACHED PHOTOS FROM MEGHAN GOULD PETERSON:
HEAD SHOT SHOWS GOULD AS ABOUT THE AGE HE WAS WHEN HE WAS KILLED.
PHOTO OF GOULD IN UNIFORM SHOWS HIM ABOUT 15 YEARS YOUNGER. ORIGIN OF SMOKE-LIKE WHITE AREA IN THIS PHOTO IS UNDETERMINED.


Posted by roseabouttown (Rose Moore) at 9:56 AM