THE LOYAL HERO DOGS WE LEFT BEHIND... 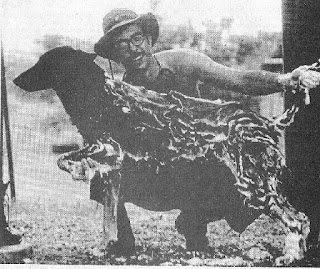 (BLOGGER'S NOTE: I conducted this interview more than a decade ago, for my weekly column in Gazette Newspapers of Ohio. Now the Military Working Dog Memorial is approved and will open next year. A bill has also been approved for the care of retired military working dogs, for their care and adoption).

HER NAME was Cali; she was a U.S. Army Scout.


She was intelligent and beautiful, with thick dark hair, aristocratic form, and innate abilities that enabled her to save lives of fellow soldiers by searching out the traps and ambushes and other perils of war.
Larry Buehner was Cali's partner in Vietnam, but all he has of her today are souvenirs and memories ... and the knowledge that the U.S. Army she had served abandoned her.
Cali was a German Shepherd, one of thousands of war dogs left behind---deemed "expendable" when U. S. troops pulled out of Vietnam. Her former partner, Larry Buehner, pulls Cali's leather muzzle from among his souvenirs, and he reflects upon the friend he worked with more than 30 years ago:
"I didn't need to muzzle Cali, except on the aircraft," he recalls. "Cali was one of the few female scout dogs in my platoon ... She was really a good dog. Off duty she was playful and affectionate; on duty she was serious and focussed ... She was not aggressive ... She did nip a few guys slightly, but they were only officers." He grins. "That's what the guys all said to her, 'Well, that's okay; they were only officers.'"
The war dog handlers were screened for an intuitive feeling for animals, and the ability to instill the bond that makes the dog and handler an effective unit. Buehner qualified by virtue of his history.
"I always had a dog when I was a kid," he says. "I left a dog at home when I was drafted ... So there I was, a U. S. soldier in Vietnam, far away from home, and I had a dog; I had Cali! ... Most of the guys had dogs when they were kids, so they were always glad to see Cali. She was a comfort, a memento that reminded them of home. They'd talk to her, play with her ... But not when she was in her harness; that was working time for Cali; she ignored all else, and was strictly business."

When a soldier trained with a dog, that dog became his friend, and that was true of Larry Buehner and Cali. He fed her, gave her water, scrubbed her, worked with her, relaxed with her ... Buehner wryly notes that as a draftee at Fort Benning, he volunteered for scout dog handler school, "because I was sure I had a better chance of coming back alive with those trained dogs." He laughs outright. "Only later did I learn, our dogs were so effective, the Viet Cong had bounties on them ... and on the handlers too."
CALI AND HER HUMAN PARTNER were attached to the 37th Platoon, supporting the 2nd Brigade, 1st Cavalry Division Artillery at Phuoc Vinh, Vietnam. From platoon quarters at Bien Hoa, scout dog teams were sent out daily to the forward area at Phuoc Vinh. From there they were deployed to the 1st Cavalry units in the field. Larry Buehner thinks back to those days of "walking point" with Cali---dog and handler leading the way ahead of a combat formation.
They were the "point men", dangerously vulnerable in the tactical formation, and statistics show these scout dog teams incurred the highest rate of casualties. It was not a picnic. Buehner considers himself luckier than some. "I never had to fire a rifle ... Still, it was a war on nerves, tense all the way." A handler had to constantly keep his eyes on his dog. The dog's reactions were a sort of code, a message to be read and relayed back to the platoon leader.
"We commonly went into the field for three days at a time ... I walked Cali off the leash, working with a silent whistle. She walked 25 or 30 feet ahead, checking often to see that I was with her ... Once when we were walking point, she began alerting. I radioed back to the platoon leader, but he ordered us to keep on going ... I was surprised; had Cali been mistaken? .. Cali kept alerting, then one of the guys thought he heard slight movement out ahead ... Cali had saved us; we had almost walked into an accidental ambush by our own troops!"
One patrol went on longer than expected, Buehner remembers. "Cali and I ran out of food. I called for a food drop ... Cali got her drop, but where was mine?" He chuckles. "I found out that Cali's Gainesburgers didn't taste too bad with water, but they were gritty."
Each period in the field was followed by three days back at Bien Hoa "for a bit of rest. Then Cali and I would spend at least two days training together, to keep her interest and alertness at peak level, before recycling back into the field."
Though Larry Buehner's daily contact with Cali ended when his Military Occupational Specialty was changed to combat photography, his bond with Cali wasn't broken. Buehner had a degree in fine arts, and photography seemed more in keeping with his education. But he found working with the dogs was "more selfsatisfying. A lot of us, even after we lost our jobs as handlers, would re-visit our dogs ... "

CALI WAS JUST ONE of 4,000 war dogs in Vietnam---Army, Marine, Air Force, and Navy. They were highly trained in different specialties against the enemy's ability to surprise and destroy. Cali's specialty was Infantry Platoon Scout Dog. In addition, dogs were trained in the following specialties:
*Combat Tracker Teams who tracked enemy through scent or blood trails after contact had been broken.
*Sentry Dog Teams who defended aircraft, airfields, supply depots, ammo dumps, defensive perimeters and other strategic military facilities; and often were deployed as the first line of defense at night.


*Patrol Dog Teams who were deployed to patrol and protect air bases; to track, search buildings, and attack; and to ride with law enforcement.
*Mine, Booby Trap and Tunnel Teams who were deployed with infantry and combat engineering units to detect mines and booby traps, and to search enemy tunnel complexes and Vietnamese communities for hidden arms, ammo and supplies.


*Water Dog Teams who travelled with the Navy on patrol boats along the waterways, tracking scent of enemy divers underwater.
By some estimates, Cali and her fellows in the K-9 Corps saved as many as 10,000 U. S. and Allied lives during Vietnam alone. They were unpaid, as far as money went; food, water, and the companionship of human soldiers was enough for them. Yet when the human U.S. soldiers left Vietnam, the dogs were left behind.
WHEN THE 37TH PLATOON was dismantled, and the military didn't need as many dogs, thousands of the loyal canine soldiers were classified as "expendable equipment to be abandoned in place." "What happened to them ultimately isn't known to us," says Larry Buehner. "We tried with no success to get a bill proposed to get the dogs back home with us ... Dogs had gone home with their handlers from World War II and Korea, but not this time."
In the variety of explanations offered by the military, some handlers heard that the South Vietnam Army would receive the dogs and train with them. "We all knew that was a lot of hooey. The Vietnamese had never seen big dogs like ours; they were afraid of them. As cultural practice, they ate their dogs ... Plus, our dogs were well-indoctrinated to see Vietnamese as enemy ...
"We sought respect and recognition for the dogs. We couldn't get agreement for a national memorial. We couldn't even get them on an honorary postage stamp (though there were 100,000 signatures). We lost out on that one to a cartoon rabbit---Bugs Bunny!"
ANOTHER DOG-AND-HANDLER Team--the team of Burnam and Clipper--came to my attention during my efforts to track down a Northeast Ohio war dog handler for an interview. John Burnam of the Vietnam Dog Handlers Association (VDHA) is the man who steered me to Geauga's Larry Buehner.
Burnam told me he and Buehner, armed with their memories, would be appearing in Lake County at Lake Farm Park.In that exposition of war dogs, guide dogs and police dogs, the war dog handlers would focus on the need for a national war dog memorial.
A Virginia resident, John Burnam is a decorated veteran who served two tours of duty in Vietnam. He detailed his experience in the book, "Dog Tags of Courage: The Turmoil of War and the Rewards of Companionship". Lt. Gen. Harold K. Moore, USA retired, encouraged Burnam to write the book, and Burnam gifted me with a copy.
The book is real and readable. It reflects the guilt and grief of all the handlers who saw their dogs abandoned. It also sheds some light on the handlers' steadiness of purpose in campaigning for a national memorial for the dogs.
There is heartbreak in the narrative. Burnam writes with lingering horror of an enemy mortar attack on the scout dog kennels. The sleeping scout dogs were locked in for the night, and the handlers could only listen helplessly to the pain and panic of their dogs. Some dogs died; some were badly wounded; Burnam's scout dog Clipper was mid-kennel and survived.
WHEN BURNAM LEFT Vietnam, he was well aware of the nature of Clipper's impending fate. He writes with bitterness and sorrow of the last goodbye:


" ... I viewed Clipper as a soldier, not equipment. He displayed uncompromising loyalty and obedience. His memory was magnificent. He knew what he'd been trained to do ... I got up early in the morning ... filled his water bucket with fresh water and cleaned his run for the last time, (and) afterwards I sat with him under his tree and stroked his head and back.
My mind flashed back to the many combat missions we'd gone on as a team. Clipper had alerted me to danger and saved countless lives on so many occasions. It was hard for me to believe I was going to have to leave him behind. He was a real American hero ...
Clipper couldn't speak for himself. He was at the mercy of the people who had recruited him for military life ... As Clipper's handler, I was the only one who had truly developed an allegiance for this dog ... I felt I was abandoning a brother. How could my country weigh me down with the burden of this lifelong memory
...I knew, as I sat under the tree, with my dog leaning against my leg, that I'd never see him again in this lifetime ... I tried to hold back my tears ... I looked into Clipper's eyes and gave him one last farewell bear-hug.
Afterward I turned and walked away, with the bitter and sad knowledge that Vietnam would become my dog's final resting place. Clipper stood erect with ears pointed high like the champion he'd always been.
I sensed that he was watching me as I eventually vanished down the dirt road ... "
(To learn more about the military working dog monument and where donations can be sent, google www.jbmf.us website. Comments may be registered with blogger at randrmoore@gmail.com)
ATTACHED PHOTO: Bath day in Vietnam for Army Scout Larry Buehner and his k9 partner Cali.

Posted by roseabouttown (Rose Moore) at 8:45 AM