CARS ARE A PART OF OUR PERSONAL HISTORIES 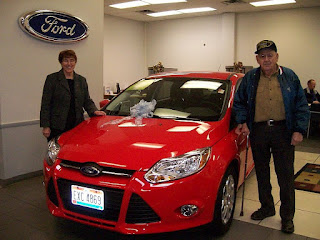 In the "old days," when I was graduating from high school, the idea of a first car was a lofty goal. The cars of our past, like the music of our past, become part of our personal history.

My own first car, a shiny black 1958 Ford Custom Tudor, served me well. Not just once, but twice!

It was stick-shift with the bare basics; after all, almost everything was an "extra" in those days.

I "installed" a radio by balancing my small orange-plastic transistor portable in the ashtray.

As for windshield-washers, what were THEY? The only such thing available (perhaps the prototype) was made with plastic tubing and a squeeze-bulb operated manually by the driver, and I did put in one of those.

When I married, my husband and I combined to a single car, as did many newlyweds of that era. It was with practicality but some reluctance that I parted with own car in favor of his newer vehicle.

Later we returned to two-car status, and I found and bought an old Ford Custom that looked just like the one I'd sold. When I took it home and cleaned it up, I found a note in my own handwriting behind the glove box, and a fragment of my orange radio under the seat. An old friend had returned!

I drove the car through its second life, and when it finally gave up the ghost, it had given my husband and me full value, and more. I was sad to think that car would suffer such an ignoble end as to be crushed in an automobile recycling yard. (A junk yard!)

I expressed that feeling to the owner of the junk yard, a man my husband and I had known for a long time, and he told us that wouldn't be happening to my car, and that my husband and I should come down to his yard on Saturday night to tell that car goodbye.

He had prepared a small picnic for us, and Bob and I and my very young son sat on lawn chairs after dark that night and watched as my car disappeared forever in a blaze of glory as the junkyard people burned it in a spectacular open fire.

(That was pre-EPA, of course).

Today, all these many years later, Bob and I drive a little Ford Focus 2012; we love it! It's sporty and fun and as red---maybe redder---than the fire that consumed my beloved '58 Ford.

Posted by roseabouttown (Rose Moore) at 7:56 AM