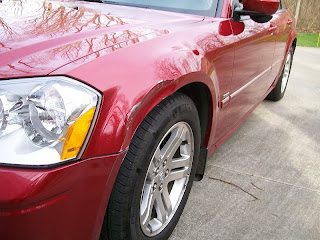 If I had been Santa, and I'd have dinged up my shiny new fire-engine red sleigh on Christmas Eve, I couldn't have felt worse.
The "ding victim" I speak of today is our Magnum RT in Inferno Red; with 19" tires, moon roof, Hemi engine with fuel-saving 4/8 horsepower; a Mercedes-computerized stability package and a whole lot of other good things.
It has been spunky, responsive, sporty and fun, and maneuverable to the nth degree. We have continued to love it as much as we did when it was delivered in October 2004.
In the 7 years since, it has spent lots of good time on the road with us---boonying around town; exploring country roads; travelling to out-of-state places; cruising on warm summer evenings---and we have never stopped enjoying this car. To us, it has continued to seem perennially new!
This morning I was backing out of the garage when (for whatever reason) a sudden explosive sneeze racked my body; so violent a sneeze I still feel sore in my rib cage. In mid-sneeze I heard a sickening THUNK! Oh no! Sure enough, the sneeze had apparently caused me to turn the wheel... and the car and the door-frame collided.
And Oh!  the poor car up to this episode has never been dented or scratched. Its showroom-fresh looks have been maintained with such a good, reflective shine that it was impossible today to get my camera to adequately show the depth of the brand new crease in the left front fender.
Oh Rose! Through more than 50 years of driving, you have never been the sort to crease your car backing into or out of a garage or anything else. And it had to be our Magnum when you did!
Bob was forgiving, though his face fell when he saw the car; it even broke the heart of the body-shop man who details the car each year, and who falls in love with our car whenever he sees it.
He hasn't yet presented the estimate!
Posted by roseabouttown (Rose Moore) at 1:58 PM 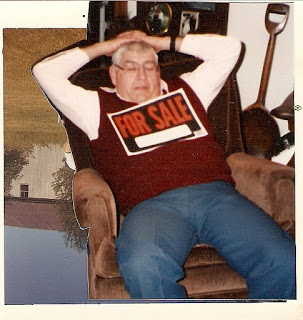 Posted by roseabouttown (Rose Moore) at 8:40 AM

Years ago, over-stuffing on Thanksgiving was the fashion in my family.
Most of my photos from those years show a houseful of family draped over chairs, couches, the floor... sleeping off the meal.
One year after dinner, our mischievous sons stayed awake long enough to sneak a "For Sale" sign onto their overstuffed dad.
They photographed the moment for posterity.

Posted by roseabouttown (Rose Moore) at 8:26 AM


*I do not celebrate Black Friday. Or Black Thursday. Before too long, I fear, such blatant Christmas Consumerism will expand into Black November.

*Rose's Rules for Thanksgiving Dinner: Gather at your table with an open heart. And don't talk politics.

*My favorite Thanksgiving item is the stuffing; it's the main reason I cook the turkey.

*Speaking of stuffing, a good hostess never pushes the guests to stuff themselves. Let them make their own decision. To stuff or not to stuff.
Posted by roseabouttown (Rose Moore) at 8:13 AM