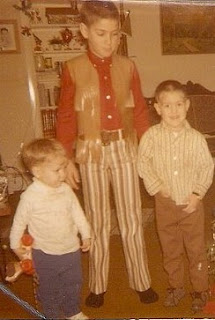 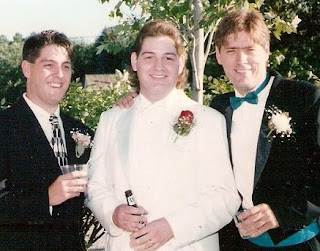 (These two photos are of my three Moore boys, circa 1972 and 1998, all of whom survived something we called "The Boy Spanker")
It was a very thick old yardstick, printed with a 1910 local advertising logo. Given to me by an old Hardware store owner, the yardstick had been in my home for years when, in the early 1970s, it first became known in my house as "The Boy Spanker."
At the time, I had returned from the hospital after surgery, to begin a recovery of several weeks. Somehow my three mischievous sons interpreted that as a promise of a bit of freedom---a bit of supremacy, so to speak, over a mother who probably wouldn't be able to do much about it. It began with a bit of sass, and then a bit more, just because they thought they could.
I knew them well enough, and I was prepared. From beneath my pillow I drew out the big old yardstick and placed it on a small boy's bottom as a bit of warning. The hefty look of that old yardstick convinced them they didn't want to dare a harder whack. For years thereafter, whenever I was pushed too far, I reached for that yardstick. It was all that was needed; I never actually had to use it.
Years later, one of my boys was home on break from college. Legally, he was 18, a fully grown adult who could make his own decisions, and in a minor confrontation he reminded me of that. He was sitting on the couch beside me, and The Boy Spanker was sitting handily nearby. I reached for it, and when I smacked his work boots, we both were in for a real surprise: That Boy Spanker splintered instantly in many little pieces!
I don't know who was more astonished---the boy or the Mom.  We both broke into spontaneous laughter as he declared, "Wow! If we boys had known that yardstick wasn't everything we thought it was, we sure would have defied it a long time ago!"

A K9 SOLDIER WHO DIED IN THE CHOPPER ATTACK IN AFGHANISTAN... 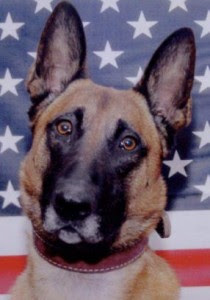 This is Bart. On the "Pet Advisor.com" website, I found the photo and information about his death in the Afghanistan chopper attack.
He has a soulful sadness in his face, does he not?
Rest in peace, K9  Bart.
Posted by roseabouttown (Rose Moore) at 11:18 AM