A SPECIAL DAY AT CONCORD AIRPARK... 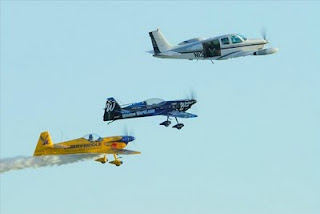 Today from my yard I could see and hear an unusual number of little planes above me. All morning, they had been taking off and landing from a neighboring property up the road, Concord Airpark.

I knew what that activity was about; today is the local EAA chapter's first annual Pilot Proficiency Day... with fly-in breakfast, seminars, swap meets, aviation contests and more.

The goings-on have been taking me back a long way, to what many of us old airpark fans often refer to as "the golden days" at the airpark.

I learned to fly there in the 1960s, when that airfield was always alive with activity of people, planes and families. The late and great Adolph Luhta was the operator, and every year or two there was an air show there which was as much fun as any of the big professional events; maybe better!

I often ran the airport's ground-to-air radio. I was also a member and officer of the airpark's social club called "The Skylarks," which planned the airshow, the potluck socials, the hangar dances and any other activity the group could think of to play host to pilots and their families, and sometimes the airpark's neighbors.

I particularly remember a holiday dance at the Airpark. Adolph groused about having to clear the hangar for the occasion, but we all knew that was mostly his usual "gruff bluff." On arriving at the dance, no one was really surprised to see that he had installed an attractive tent-like walkway from the office to the hangar, to keep us out of the cold.

The walkway and hangar were lit up like a Christmas tree, and when we walked into the dance, it was plain to us that Adolph had also put in great efforts in making things hospitable and party-hearty and warm for his guests. He was a great host. He had even taken great care to see that the big juke-box was stocked with just the right music for good dancing. And, as I recall, he also made sure he danced with every woman there! (A burly man, he was nonetheless light on his feet, and an excellent dance partner).

In summer afternoons, evenings and weekends, the airpark was a magnet for all kinds of people---not just pilots and students and instructors, but neighbors and other visitors who drove in or walked in, to sit outside on the metal glider or a fence, to watch the take-offs and landings and socialize with the airpark's staff and the regulars.

In any season, the airpark's lounge was always a place where old pilots sat and shared what we called "hangar tales" (the aviation version of "fish tales"). Among the pilots, there was often an assortment of non-pilots too, and they were there for the fun of listening.

Early this afternoon, as I headed out on an errand, I drove by the airpark. I have to admit that the cars, planes, people and activity there made this old girl feel young again!

(It also has to be noted that the airpark owner hosting today's EAA event is Connie Luhta, widow of the late Mr. Luhta. She also holds the airport office open to the monthly EAA chapter meetings).
Posted by roseabouttown (Rose Moore) at 8:57 AM

THUNDER MOON AND OTHER NAMES...

Shortly after 2 a.m. tomorrow morning, the "Thunder Moon" of July will wax into completion of its fullness.

I like the thunder name, given to the full moon of July milleniums ago, by Native Americans. Thunder, after all, is common in this month of storms.

The Native Americans bequeathed these names in direct tribute to something in nature that was important to their existence. The life they lived, after all, was natural.

In this complex world of today, what would we "civilized people" name the full moon of July?

Rose About Town will think about this if, by some miracle, she is able to stay awake til 2 a.m. to contemplate the fullness of the moon.

But there's been a sleepy, sultry feeling in this day, and chances are your blogger Rose will fall asleep before the moon appears. And so my nomination for its name might be: The Sleepy Rose Moon.

Send to me your own choice of a name for the full moon of July. Anything received at randrmoore@gmail.com will be shared with readers of this blog.
Posted by roseabouttown (Rose Moore) at 4:01 PM