SOME BOB-AND-ROSE MEMORIES FOR VALENTINE'S DAY.... 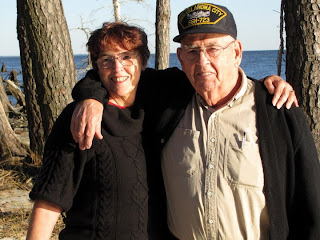 Though Bob and I weren't married on Valentine's Day, it seems appropriate to observe this sentimental day with memories of weddings I have witnessed or been a part of.

GOOD OMENS: It was a classic Autumn day in 1960when Bob and I were married. We exited the church to a shower of rose blossoms tossed in rowdy fashion by the children of our families. The sunshine of this day was an auspicious omen, a family member said.

"No," an elder guest insisted, drawing on the wisdom of her years. "In my day, it was said that rain on your wedding day foretold a long and happy married life. Your little shower of roses might not count!"

As it turned out, we did get rain as well. As we left our afternoon reception, we were greeted by a cloudburst! (If the rain had not appeared, I believe we would have driven until we found some, just in case).

LIKE AN ALTAR BOY: At a good friend's wedding, I was gifted with an honored place in the front pew. I was expecting my first child, and my boyish haircut and snow-white, lace-edged maternity smock prompted a friend to look at me and chuckle that, "You look just like an altar boy."

The wedding was delayed a bit; we weren't sure why. The stars were all in place, yet the priest kept peering out from the sacristy. Suddenly I was pulled unceremoniously to my feet, and an impatient voice demanded: "Why are you just sitting there? I've been waiting for you!" I had been mistaken for an absent altar boy!

(When the tardy boy appeared, the ceremony went on without a hitch).

SHOWERS FOR THE BRIDE: Some years ago, as my eldest daughter-in-law planned her outdoor wedding, it rained through every weekend leading up to the event. "Do you think we'll need to find an alternative location?" I suggested nervously. The bride-to-­be insisted it wouldn't rain that day; she would be married in the yard of the childhood home she loved, and the sun would shine for her, and that was that.

Her faith was handsomely rewarded. For the first time in many weekends, her special day awoke to sun and birdsong. As a happy bonus her mother's roses bloomed. Under God's clear skies, the officiating Reverend declared the happy couple doubly blessed---with each other and the sunshine.

HOLE-IN-THE-WALL GANG: The wedding of our youngest son took place outside of our own county. He and his bride reserved a block of good hotel rooms to spare us all a long drive home that night. A frustrating snafu forced us down the highway into less-than-mediocre lodging. As we settled tiredly into our rooms that night, I heard a tiny voice from nowhere calling: "Grampa? Gramma? Is that you?" We traced it to a baseboard hole where an electrical plug had been removed and not replaced. Peering from her room next door, our four-year-old granddaughter had heard our voices and was clearly worried. "Who put you in that mouse-house, Gramma, and how can you get out?" she wondered. Her Mama brought her briefly to our room to ease her daughter's mind.

Early in the morning, we observed a long goodbye for our middle son, with family breakfast on the balcony. His appearance at the wedding had been astounding; we knew his submarine was out to sea, and his furlough for the wedding had been cancelled. But as his brother's wedding day approached, a craft was being lowered for crew members whose furloughs were approved. Suddenly the captain turned and bellowed to my son: "... You get out here NOW and head for home before I change my mind!" So began a frantic race that brought him to us moments before the ceremony; it was a gift for all of us.

WOMEN IN RED: One wedding I remember was a bit unorthodox, according to the social standard of the time. Bob and I had been enlisted on short notice as witnesses and sole attendees. Bob knew the bridegroom only slightly, and neither of us had ever met the bride. Their friends and family had refused to publicly stand witness, for the bride was gloriously pregnant!

No time for shopping; the only dressy dress I could fit into was a crimson crepe-georgette chemise; I had no choice! It had no waistline, nor did I, for I was pregnant with my second child. We arrived at church to meet a bride so great with child it seemed the baby could arrive at any moment. The bride, like me, was wearing red. The minister looked startled as the two of us, bride and matron of honor, stepped forward; you couldn't miss us!

The wedding was memorable, not only for these circumstances but for the obvious sincerity of love that passed between the wedding couple in that little country church. To us, the only witnesses, it was clear this union was not reluctant obligation. Once married, they turned their faces to us, and their smiles were as radiant as any bride and groom we'd ever seen.

FAMILY PROMISE: One bridegroom, marrying for the second time, had custody of a pre-teen son. His bride was a sweet and lovely young woman, but we wondered; was she mature enough to manage instant motherhood? The bride arranged the wedding HER way, and in the process she supplied the answer to our unspoken question. She turned and summoned her bridegroom's son to stand beside them as the ceremony unfolded. Her vows were spoken not just in holy matrimony to a husband, but to declare and celebrate the unison of husband, wife and son as family.

BABY TALK: Some wedding guests were startled when a clergyman began a scolding sermon. Marriage, he intoned, is not for romance, not for joy or happiness of lovers, not for anything but procreation and responsibility. His bitter discourse seemed to toll incessantly.

In the congregation, an infant began to wail. Speaking out above the noise, the clergyman looked sternly at the mother. Baby didn't quiet, and Mother, surrounded by her children, simply smiled beatifically. Other babies joined the chorus, and their mothers likewise feigned oblivion. Only when the lecture was pushed high-speed to a merciful conclusion did the mothers soothe their howling babes.

"It was quite a realistic look into the future," mused a father afterward. "I'm surprised the bride and groom didn't change their minds and bolt away!"

KEEPERS OF THE FLAME: I often smile at the recollection of a bride and bridegroom who had problems lighting the Unity Candle. When finally it was lit, the candle toppled forward with a thud, and the flame went out. With audible giggles, bride and bridegroom retrieved the candle and began again, and this time all went smoothly. There was a message there, the minister declared, smiling at the couple and the audience: "They met the challenge. I wasn't worried for a minute. "

DANCE TO YOUR FEELINGS: The bride was elegant; her dress was perfection; we watched her gliding down the aisle with the dignity of royalty. When she saw her bridegroom, she broke impulsively into a little dance that disappeared almost as quickly as it had begun. The Reverend was not amused. "My spirits felt so high," we heard her whisper in apology. "I didn't know my feet were going to do that. "

TEARS FOR THE BRIDE: Another wedding began serenely, with no tears from the bride's mother, or the groom's mother, or the grandmothers, or any of the female attendants. The bride and groom were calm as well. But as the bride began to speak her vows, she burst into tears, regained composure, then began to cry again. She sobbed her way through the rest of the ceremony. Afterward, she calmed her worried bridegroom, telling him, "I'm okay, Honey. I was just too happy!"

I CRY A BIT at weddings myself. They represent the beginning of a significant and unpredictable journey. When I listen to the vows, I repeat my own and silently wish the couple a life as durable and happy as Bob and I have known as man and wife for more than 50 years.

Where Valentine's Day itself is concerned, I admit we've never made a big deal out of it. He's my valentine and I am his, and that's always been enough.

Posted by roseabouttown (Rose Moore) at 7:01 AM