READER RESPONDS TO BLOG BY SHARING AN INTERESTING BRIDGE...

I've been reminded of your bridges blog ever since it ran, and every time I take India back to her mom in Avon Lake. In order to get out of town, I have to cross the Black River in Lorain on the city's east side.

Usually, leaving town, I crosss what locals refer to as "the high level bridge." According to the county engineer's office, it is "a 1700-foot single-span through-truss cantilver style bridge.

Its real name is the Lofton Henderson bridge, named after a World War II hero and Lorain native. Henderson was posthumously awarded the Navy Cross for his deeds in the Battle of Midway. As he was attacking a Japanese aircraft carrier, his plane's left wing burst into flames. Henderson continued his attack, dived into the carrier and perished.

Coming back into town, usually just when the sun is setting in the wintertime, I come a different route, on U.S. Route 6, and cross what is commonly called the "Bascule Bridge." This is my favorite one, although during shipping season, it can mean a bit of a wait if you happen to come by when a large ship wants to pass through.

If you're not in a hurry, it can be fun to watch the bridge split in half in the middle and slowly part, with the roadway going almost straight up into the sky.

"Bascule" refers to the method of using counterweights at the base of each leaf to open and close the bridge, jack-knife style. The Lorain bridge is a double leaf bascule. It is the second largest bascule bridge in the world. For a time after it was built, it was the largest.

This bridge also has a proper name, the Charles J. Berry Bascule Bridge. It was named for Lorain native Berry, who received a Medal of Honor for activities during a grenade battle in Iwo Jim. (The bridge must have been dedicated some time after the war, since it was built in the late 1930s and opened for traffic around 1940.

The attached photo is of the Lorain Bascule Bridge.

Thanks for writing about bridges. I enjoyed it! 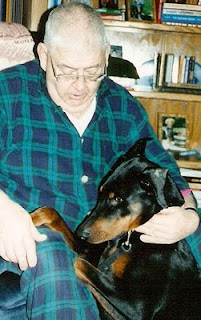 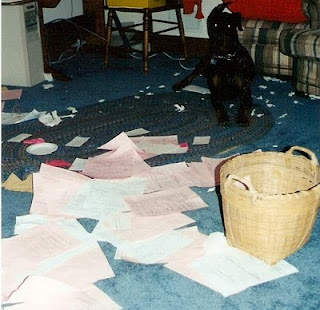 Today I found these photos tucked in a book; I hadn't seen them in a long time.
They were dated 1998, when our big dog Jack---still just a pup---had been given to us by his original owner, who was moving to an apartment where he couldn't keep a pet.
As with most of our dogs, Jack liked to sit with me in my home office as I worked on my newspaper column. Early one morning I walked into that office and discovered that Jack had emptied my waste basket! As you can see, he had also decided to act as a shredder!
Of course I gave him his first scolding---it wouldn't be his last---and he ran to the sheltering arms of my husband for comfort. As you can see from that photo, he kept a wary eye on the mistress he had so displeased.
Jack retained a boyish air of mischief most of his life. He was fun to have around. It has been a year since his death, and we still miss that dog. And his mischief.
Posted by roseabouttown (Rose Moore) at 8:20 AM

Conde McCullough, working for the Oregon Dept. of Transportation in the 1930s, designed and build this Siuslaw bridge near Florence.

In my eyes and those of many other people, it is a masterpiece.

It is but one of McCullough's "beautiful bracelet of bridges" along the lovely coastal areas of Oregon.

I love bridges, but I believe I love McCullough's bridges above all others.

I HAVE NO FEAR OF BRIDGES...

SOME PEOPLE ARE afraid of bridges; that fear is hard for me to understand. As far back as my memories let me go, I have been in love with bridges.
When I was a child, I told my father why I loved to be on bridges; it made me feel I was all as one with the earth and sky and water. From that point on, whenever possible, he would detour from his route so I could ride across a bridge.
I am so much older now, but the travel journals of this 70-year-old are still full of descriptions of bridges.
I have written of a joyful traffic jam on the legendary Golden Gate in California, where my husband and I stood outside our car, high above the water with a lot of people, socializing as we watched the sun set. It seemed to me there was an air of disappointment as the traffic cleared ahead...
I also wrote about a slender streak of  bridge in South Dakota. In sprightly fashion, it arched across a jagged, spunky creek whose waters sparkled back at us like a silvered bolt of lightning; and I felt like I was flying.
I wrote of New York City where, as others sought the more traditional landmark destinations, I sought out the city's bridges, and they were exceptional. They were beautiful by daylight and even more impressive when lit up at night...
OF ALL THE BRIDGES that have become a part of memory for me, I was most inspired by those built along the coast of Oregon by Conde B. McCullough, an engineer and master bridge builder of the Depression era. He had been commissioned by the WPA to build five bridges on Highway 101, and he infused those spans with beauty that more than matched their strength and function.
First I met his Siuwslaw River bridge at Florence, then one-by-one sought out the other four---at Rogue River, Coos Bay, Yaquina Bay and Cape Creek. Mcullough's stated plan was that these bridges would stand as "jewel-like clasps in perfect settings linking units of a beautiful highway." Clearly, he accomplished that.
From a distance they are light and curving presences above the waters, but as you enter them, these finely detailed concrete-and-steel structures are cathedral-like---with soaring arches, towering obelisk towers, ornate detailing, decorative brackets, bevelled handrails along the decking...
From a historian in a small town somewhere down that highway, I learned McCullough had designed his bridges to be seen in their entirety from many angles as you approached them, yet he meant for you to drive within them to appreciate the whole of his designs.
"You learn to know McCullough's bridges," I was told by this historian, who obviously loved those bridges as much as I did. "From a distance they are merely artful; up close they bear McCullough's prayerful touch... His bridges are both strong and beautiful, and they have stood the test of time."
THE BRIDGES OF TODAY can have a special beauty too. But it seems somewhere along the way we changed our way of doing things.
McCullough's spans were built with something called redundancies. These are features built into the structural design so that if one part of a bridge might fracture, the whole structure would not fall down. Only in the years since World War II, until more recent decades, have bridges been constructed without redundancies, and the bridges that remain of that design have proven to be fracture-sensitive.
These days, the maintenance of our bridges---or lack thereof---is another problem. Too often, visual inspections have been used when advanced technology has been available that could help in detecting hidden problems. Further, elements of maintenance and reconstruction are expensive, and substantial amounts of legislated highway appropriations have been diverted to pork barrell uses that have nothing to do with basic care and repair of our bridges and the highways leading to them, or with construction of new ones. (And then there's road salt, but that's a story in itself).
WORST OF ALL, at least for bridge-romantics like myself, coverings have been installed along the sides, where road meets bridge. Perhaps this is for the sake of safety; or perhaps to keep some fool from jumping off; or both But these coverings obliterate the view of ground and water as we pass; thus destroying the illusion I have always loved...Of being all as one with earth and sky and water as I cross.
(How do you feel about bridges? Do you fear them... or enjoy them? Do you have a favorite or a least favorite? Do you have special memories involving bridges? You can send your comments and/or photos to randrmoore@gmail.com. Unless you ask me not to, I will share them on this blog---with or without your name, at your request).
Posted by roseabouttown (Rose Moore) at 9:31 AM