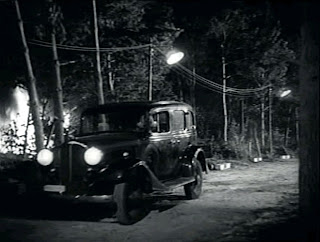 Here is a photo I found on the Internet a few years ago. It's a good photo for me to share because it's a 1934 Buick, and I seldom think of my father without thinking of his own 1934 Buick. I don't think this is the same model as Dad's; his may have been a model or two higher. But the point is, it's a black 1934 Buick--the only kind of car we kids had ever seen our father driving.
Before he married Mom, Dad would buy a new car every year or two. Then he bought that Buick, and whatever it was about that car, he loved it so much he never let go of it. He purchased that car when it was new, and it was still our family car in 1955 when Dad died.
To this day, I identify Dad with that car. As a child, I would listen for the sound of that car when Dad came home from his work at the B&O Railroad. He often accepted overtime---it brought good money for his family---and so he often arrived home after dark, and often we kids would already be in bed. I would leave my bedroom window open just a bit, whatever the season, so I could hear him arrive. The motor of Dad's car made a sound like wind rushing though leaves, and I loved it.

Our big family of kids was, however, the subject of ridicule when Dad occasionally came to school to pick us up. Nobody else had a car that old, and in those days, society had not yet begun to appreciate old cars as classics. The sight of all us kids crammed into that old car prompted a lot of jokes.
The only ding on that car was on the top portion of the front fender, and it apparently had happened when something heavy fell on the car while Dad was at work. Nobody, including my father, had ever been able to hammer out that dent, even with the help of a torch to try to soften the metal.
Every year when spring arrived, Dad would let me help him with the "spring things" the car needed---and that meant cleaning and maintenance procedures. I'd help him as we used a wire brush to give the horse-hair upholstery a thorough cleaning, and I'd watch as he re-tarred the roof and the places where the fenders met the car body...
Dad was meticulous in that car's care. Every oil change Dad performed was written and dated on the walls of his garage, and every license plate (renewed yearly with NEW metal plates) was nailed on the garage walls.
After Dad died, Mom missed our father terribly, and she so identified that car with Dad that finally she couldn't bear seeing it in the garage any more. She sold it to a neighbor boy for $10...including all the old license plates.
Dad had passed away at the age of 50, and the car was still in perfect shape when he died. Considering the care it got from my dad, that car could possibly still have been in use if Dad had lived to be a much older man.
My husband Bob and I had just begun to talk about asking Mom if we could buy the car, when Mom unexpectedly sold it. I was greatly disappointed, but I found some comfort in the fact that it had been sold to a boy who had apparently purchased it BECAUSE of its age. He had lived in our neighborhood and had been familiar with the car and and grown to love it.
I wonder if it still exists somewhere. 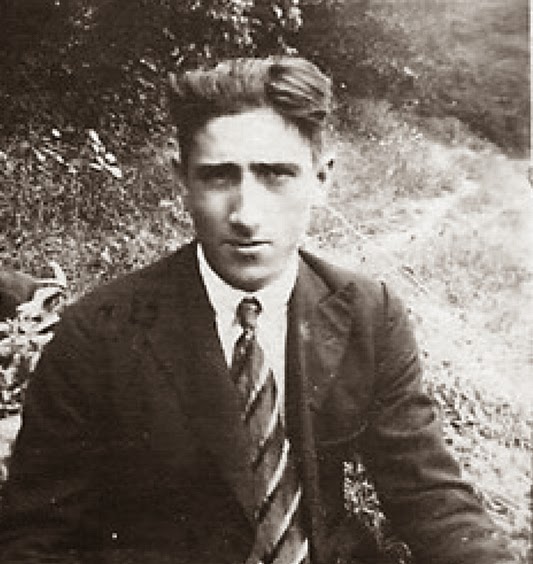 Photo of Dad, when he was still a bachelor who would buy a new car every year.
Posted by roseabouttown (Rose Moore) at 9:11 AM