This Christmas story involves a big bear and my little brother Ben.
It was Christmas Eve, and I was an eight-year-old lying half asleep in my upstairs bedroom. Dad had not yet returned from a late B&O railroad run, and Mom was sitting quietly downstairs waiting up for him.
Suddenly I heard an intriguing and powerful sound from the street below. I rolled over and peered out the window and discovered the source---the idling engine of a big red fire truck, being unloaded by fire men! I watched as they helped my mother carry packages into the house.
After the fire men left, I sneaked down to the basement where I knew my mother had gone with the packages. "Shhh!... Don't wake the others," she whispered. "It's the Painesville Children's Santa Run. Our family was apparently on their toy list this year."
My mother was aware that I had prematurely stumbled upon "the truth about Santa," and she didn't shoo me upstairs. I watched as she added the brightly wrapped packages to the rather spare number of gifts she and dad had already bought, wrapped and hidden.
I told her that one of the toys I had seen being carried into our house was a toy panda bear, too big to wrap. Mom reached out and put the bear in my arms, and that bear seemed as big as the girl who was holding it. I noticed the bear had a key, and I carefully wound it and heard the fine tones of the Brahms Lullaby. I loved it!
"The tag on this bear is marked for a girl 8 years old'," Mom said. "That's you!" I knew I'd have to wait until morning to take possession of the bear, and I set it aside to help my mother finish the task of hiding the gifts.
When we had barely finished, we heard feet on the steps and we rushed to hide beneath the stairs. From our hiding place, I could see the big dark eyes of my little brother Ben, busily poking around. "Now where did that big b'ar go?" he said aloud to himself several times. "I saw that big b'ar... " He finally gave up and trudged up the stairs and back to his bed.
I suddenly knew where that big bear should go, regardless of the words on the tag. Whether or not she agreed, Mom didn't say; she left the choice to me. And so, in the morning, the bear ended up in the hands of my little brother.
On Christmas morning, my mother seemed very concerned about Ben having seen the fire-engine that delivered the toys. What would he tell the rest of the children?
I heard her tell them, "These came by fire engine last night," and then she hesitated. Before she could say more, I jumped in with an explanation of my own: "Santa ran out of time and needed help from the firemen," I told them. "Everyone knows that Santa calls the police or the fire men when he needs extra help."

Was I telling the truth, I wondered. Deep down I felt that I was. It seems that I hadn't completely abandoned my belief in old Santa.
I don't remember what toy I received in place of that bear. But I do remember feeling that, unique among my siblings, I had received a suitable gift of my own from the night before. I had experienced the excitement of seeing that big red fire engine---so enormous it seemed to dwarf its surroundings; I had witnessed the happy laughter of the fire men as they unloaded the gifts; I could not have felt more like Christmas if I had walked downstairs that night and come face to face with Saint Nick himself.
And on Christmas morning, I also achieved a special new status as Mom's co-conspirator, she and I working together as keepers of the Christmas secrets and protectors of the Christmas magic.
And now this 70-year-old grandmother will tell you "the truth about Santa," as I see it today:

On one day a year, at the very least, Santa is real. You can trust me on that.
Posted by roseabouttown (Rose Moore) at 4:27 PM

Once upon a time, a small boy sat on Santa's lap in a department store and asked Santa to bring him a real junk yard for Christmas. To the parents' astonishment, a startled Santa said "YES"!

Santa's indiscretion in making that promise resulted in the boy enlisting his mother to help him write a very specific letter to Santa. The boy included items he would need to run his junk yard, and the letter was taken to the post office and mailed.

A miraculous postscript to this story is that the junkyard actually did arrive on Christmas Eve, in a huge box delivered by a local junk yard dealer. Somehow the man had heard the story of the boy's wish, and when he arrived at the family's door, he told the boy he did not have the exact things the boy had asked for, but what he did have came from real cars and were real items from his very own junk yard, on Santa's direct orders.

The car parts inside the box had been carefully cleaned and were carefully labelled, with notes detailing what kind of cars they came from and how the parts worked.

The little boy treasured that gift and often slept with one part or another, as some small children might sleep with a stuffed animal.

In later years, in middle school, the boy would win a science fair by building a small model engine, to demonstrate and explain how a small engine works. His inspiration had begun with the Christmas junk yard.

The boy is now a father with children of his own. If he didn't understand as a child, he surely understands now, that the arrival of that special junk yard at his door on Christmas Eve, when he was four years old, was proof enough that Santa Claus can walk in many guises.

Including junk yard operators. And post office workers. And daddies...
Posted by roseabouttown (Rose Moore) at 11:22 AM

ROSE COZIES UP TO A SENTIMENTAL DOORWAY FROM HER PAST... 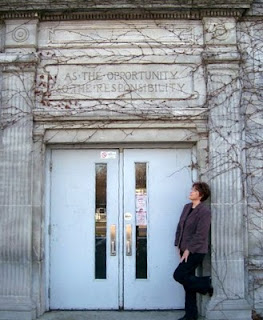 In Dec. 2009, as the new high School in our Ohio town was about to be dedicated a few blocks south, I visited the old school (dubbed "Classic Harvey").

My reason for being there was to spend a few quiet moments saying goodbye to a doorway I particularly loved. Like many graduates of the old school, I admired the beauty of that doorway, and in my years at that high school, I had often read the etched quotation in the stone over the door---"AS THE OPPORTUNITY SO THE RESPONSIBILITY.
East of this doorway was a second doorway, a beautiful twin to this entry except for its carved quotation which read: "EDUCATION IS THE SAFEGUARD OF DEMOCRACY."
It was a sad moment for me in 2010 as I watched completion of the demolition of the building. As a weekly columnist for a local paper, I photographed and wrote about the passing of the structure.

Through my column over that year, I had fielded questions from historians, preservationists, community members and alumni as to whether the carved stones at the old school could be saved. The demoliton experts had questioned the feasibility of that, but they did put great effort into the salvage attempt. And I am happy to say they succeeded in saving the stones!
Some restoration was needed, and Norman Monument Company provided the expertise for that. Now our Alumni Association is working with the school to find the best possible display place for the relics. The Association, in cooperation with school district officials, also has been working to establish an area within the building in which to develop an historical archives... a sort of "mini museum."
I congratulate the City Board of Education for its efforts over time to preserve the history of the old building in any way possible. They have wisely recognized the importance of preserving their past and blending it with the present and the future.
Posted by roseabouttown (Rose Moore) at 1:37 PM