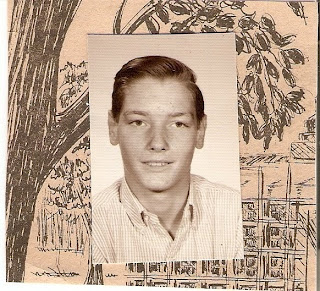 This photo was taken years after the "do-nothing machine" that is the subject in the story below. Woolly was a fast runner who won many trophies and medals and also a full college scholarship. He was a brilliant student as well. If he had lived a bit longer, he would have been married to his fiancee and received his diploma for administrative nursing. His first college diploma was in math and business, and his banking job after college taught him one thing; he didn't like that work! He far preferred the part-time work in hospitals that had helped him pay his college expenses. So he became the first male graduate of a practical- nursing school, went from there onto a full nursing degree and specialized in cardiac and terminal care, then pursued an administrative nursing degree. He worked at Metro General in Cleveland and later was hired by Duke Medical Center in North Carolina).
Posted by roseabouttown (Rose Moore) at 7:13 AM

CLARENCE AND THE DO-NOTHING MACHINE...

Today, a little brother would be 60, had he lived to that good age. My sister Mary reminded me of that fact, and in tribute to that brother we loved, I am sharing a story from his childhood. I wrote that story years ago:

IT DIDN'T FEEL LIKE a birthday. It was August 6 of 1963, and I was living in a place that seemed so far from home.

For the time being, my husband, baby and I were living in a walk-up apartment in Queens, New York ... struggling like many young couples of the time, busy at keeping our heads above water financially, trying hard to get ahead. A recession in Ohio was making jobs scarce, particularly in the construction business. So we'd gone to where the work was ... working with builders of the World's Fair.

We were working hard, and sometimes it seemed there wasn't time for laughter, or a moment for ourselves. As I went into my birthday, I was feeling homesick and frazzled.

Until, that is, the mailman rang and handed me a package. The gift I found within the wrappings transported me back home again, and back in time as well... Back to a 17-year-old-me who had driven home from work to find a younger brother's face at my car window as I pulled into the drive.

The boy was Clarence, mostly known as "Woolly"---he with the slight frame, gray eyes, freckles, sand-colored hair and serious demeanor.

HE LOOKED INTO my eyes and spoke so quietly I had to strain to hear. I saw his towel-wrapped hand and gasped, for it was soaked with blood.

"Don't tell Mom I cut myself," he begged. "I was using Dad's saw." Dad had been dead for a number of years, but Mom had kept his carefully-tended cache of tools, which still held great appeal for the boys he left behind. Mom, however, had firmly set those tools off-limits.

"Let's go!" I commanded, and my wounded little brother slid in beside me, his face bearing the grin of a happy conspirator. "I hope I need stitches," he said. "Then Mom might feel a little sorry for me, and go a little easy." I bowed to his logic; he was probably right.

When the doctor breezed in, he seemed annoying and a bit condescending in his false bravado. "Whatcha been doing, young fella?" he asked. "Lumberjacking? Whatever, it looks like you're not real good at it!"

My little brother's scorn was evident. Standing as tall as his youth would allow, he told the medic, eye-to-eye: "I was building a do-nothing machine. It took all afternoon, and it turned out just the way I wanted it. "

"That hardly seems worthy of carving up your hand," the doctor scoffed. "If you're going to waste your time on such a project," he said sternly, "It should at least do SOMETHING. Wasting time's a sin you may regret someday."

"My machine does nothing," my brother told him firmly, "That's the way I planned it. It LOOKS as if its doing something; it has spools and levers and rubber things, and it moves around a lot of different ways and makes a lot of different noises. But it doesn't really do a thing."

"That doesn't make a lot of sense," the doctor muttered as he worked. "Why would you want to waste your time and mess yourself up in the process?"

WOOLLY WAS QUIET for a moment before he looked up and told the doctor earnestly, "Sometimes you just need to sit and do nothing, but people always come along and say you should be doing SOMETHING. A do-nothing machine makes doing nothing look important; and the grown­ups let you be. "

The doctor's disapproval melted into a broad smile of understanding. "I gotcha!" he said. "I could use one of those machines myself; I really could."

"You'll have to make your own; there's only one." was the last word the doctor would hear from my perennially self-­contained little brother as the sutures were completed. Woolly and I rode home together to face the music, whatever the "song" would be.

AND SO IT WAS, five years later in a city far from home, that the memory of Woolly and his do-nothing machine resurfaced when the mailed package arrived. It was an unexpected birthday gift from Woolly, and as it turned out, it was also a lesson for me.

I laughed out loud when I spotted his do-nothing machine amidst the tangle of paper, and like magic, I got the message I think my brother had intended.

I grabbed my baby boy and put him in the stroller, and we skipped to the park to sit for hours in the summer air, doing nothing more than watching families come and go. Clouds sailed by; dust-­devils stirred up the playground floor; my baby fell asleep in his stroller, and I on my bench...

Later when we left the park, it was only because it was time to greet a home-coming husband. Before he arrived, I tossed some sandwiches into a sack and filled a thermos, and he and I and our baby piled into the car to head for the sands of a Long Island beach.

There we watched as the setting sun reached down and turned the marbled sand into flaming colors that even the energetic waves couldn't extinguish. As the day began to fade into dusk, a young man fishing down the beach brought in a skate fish, and his execution of that feat was timeless and graceful... Youngsters sat with their pails and scoops and taste-tested the sand, as youngsters always have... Couples strolled ...

As for us, we didn't even do that; we simply sat idle in the gathering dusk, and we did nothing. It was a wonderful birthday.

EPILOGUE: "Woolly"went to college, spent some years in a career he loved, then died from complications of diabetes while still a young man. Over the years, sad to say, I lost track of the do-nothing machine... but never the tender message behind it.

Posted by roseabouttown (Rose Moore) at 6:33 AM