A BIT OF SPANISH MOSS BRINGS WHISPERS OF THE PAST... 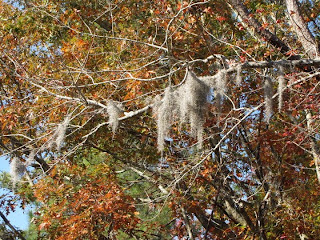 Sometimes the past can whisper to you. I felt that strongly during my October visit to the southeast seacoast lands of Virginia and North Carolina.
At the family cemetery on the site of my mother's family's old Virginia homestead, I touched the stones that marked the graves of her parents---my grandparents---who had died long before I was born, and long before my mother met my father.
With my husband, I drove along the little roads that thread through the expansive lands that had once been theirs, and I tried to recapture the stories my mother had told and to see the places of her childhood.

As a girl, I knew, my mother had loved the moss-draped trees that softly framed the waterways, and she had often photographed their beauty; many years later, as she shared those photos, I was mesmerized by what I saw.
In my southeast coastal visit in October, I found those lands and waterways much changed from what my mother had remembered. Now largely designated as wildlife refuge, they have evolved over time into open, sunny grasslands.  Gone are the trees and moss of my mother's youth, for whatever reason, be it natural changes or generations of farming... According to locals, Spanish moss has not been seen in the area for many years.
I shared that disappointment with my cousin Donna, daughter of my first-cousin Rachel. Meeting them personally had been one special goal of my visit, and I spent happy hours with the two of them; though it wasn't nearly enough.
Today Donna emailed this photograph to me, and a bit of my mother's family past began to speak to me again. In her daily walks, it seems, Donna had searched for my mother's Spanish moss; and she found it today.
It was just a shred of moss, to be sure, but it was Spanish moss and it was looking healthy.
It was enough to bring my mother and her parents back to me for a moment...
And it was enough, as well, to make me see again the special nature of the cousin who had sent her photographic image of that moss to me.

POSTSCRIPT FROM MY SOUTHERN COUSIN DONNA: "I loved this... Soon after I saw this posting on your blog, I was delivering mail in a little area called Treasure Point along the Pasquotank River (North Carolina). I spotted a tree down river that was completely draped with Spanish Moss! I'll try to get a photo of it for you."
Posted by roseabouttown (Rose Moore) at 9:25 AM