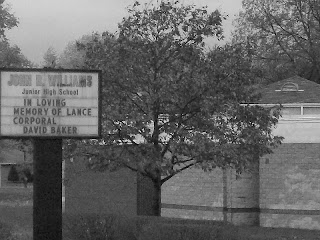 THE ARTICLE FIRST APPEARED IN MY GAZETTE NEWSPAPERS COLUMN IN 2009, AND THE MEMORY OF THAT DAY, WHEN HIS FUNERAL PASSED THROUGH HIS HOME TOWN IN LAKE COUNTY, OHIO, STILL MOVES ME. EACH YEAR IN OCTOBER, I RE-POST THIS IN DAVID BAKER'S MEMORY. MAY WE ALWAYS REMEMBER THE SACRIFICES OF PEOPLE LIKE DAVID RAYMOND BAKER, USMC, AND THE SACRIFICES OF THE FAMILIES AS WELL.

This day is All Saint's Eve, Oct. 31 2009. My husband Bob and I are here on Riverside Drive in Painesville Township, awaiting the funeral procession of a native son---22-year-old local Marine Lance Cpl. David Raymond Baker.
Baker was killed Oct. 20, 2009, while leading a patrol in the volatile Helmand province in the southern regions of Afghanistan. He has been carried home for local services, and soon he will be on the move again, to lie at rest among the heroes at Arlington National Cemetery.
Everybody can't be everywhere at once, and the funeral procession from an Eastlake funeral home will slowly wind itself across so many places before it passes here, on its way to services at Zion Lutheran Church in Painesville.
My husband and I have chosen to station ourselves along this road across from the school in which young Baker spent so many of his days of growing up. I am here not as a reporter, but to support him and his family; to stand witness to his sacrifice and to show respect to him.
We hear from people, as they stop to station themselves beside us, that miles of freeways all along the route are lined with people holding flags, and some have found a way to hoist huge flags above the highway.
Some people say the nearby city of Painesville, where the services are being held, is all but shut down by the respectful crowds who've lined the highways and side streets with their flags and hands on hearts.
All along Walnut Street as we have driven here, and even outside the procession routes, we have seen the flags and signs set up in Baker's honor. Here on Riverside Drive, homeowners have begun to come outside, to stand like sentinels in front of their houses; others have begun to walk in from the side streets.
We have arrived quite early, and although the rain has almost stopped, the dampness and the darkness hold command. Despite the weather and the early hour, we are amazed how many people have arrived before us.
Some, like us, have passed a railroad bridge abutment up the road from the high school. That concrete abutment, on a bank above the roadside near the Grand River, has always been a site for mischief, in the form of graffiti applied by graduating Riverside High School seniors. This time the painting seems appropriate and has been installed as carefully as youthful spirits will allow. In red, white and blue, the words stand out in Baker's honor.
We find a place to park, and a clutch of flags is handed to us by an old war veteran, to pass along to those who have no flags. The numbers build up steadily on both sides of the road. Old people, young people, all ages in between... families and friends... people alone or in small groups, arriving with their flags, in ATVs, jeeps, cars, trucks, bicycles and on foot...  All will stand and quietly wait, showing no impatience...
Many, like my husband and myself, are strangers to the young Marine. Most declare a common purpose: "to honor and support him and his family."
It doesn't seem this mostly silent congregation has been organized by a group or is politically motivated; it seems instead they have arrived by individual volition; and some by sudden impulse. We scan our eyes in both directions along the roadside and soon we cannot see the beginning or the end of these long lines. Cars of people continuously come in for the purpose that has drawn us here, and soon they begin to seem like a procession in themselves.
This somber mission matches well the somber nature of the weather. The mood is quiet and subdued, as if we've all lost one of our own. And in a way we have.
As the time grows closer, the clouds droop heavily; the dark sky lowers by the minute, and a chilled wind sets the flags a-flutter. We see the flashing lights and motorcycle escorts that signal the young Marine's arrival. As they pass, the sky begins to shed more sprinkles until it's hard to tell the raindrops from the tears on people's faces.
From a grove beside me, a sudden gust of wind strips sharp-edged maple leaves from off the trees, and they pass before my eyes like golden stars---not unlike the symbols of the wartime Gold Star Mothers, an organization for mothers who have lost sons and daughters in service to their county.
And I, a mother of three sons, am reminded sadly once again, this fallen hero, the young Marine Lance Cpl. David Raymond Baker, was also someone's son.

(Rose About Town accepts your comments at randrmoore@gmail.com)
Posted by roseabouttown (Rose Moore) at 5:44 AM