DAY ONE--PART IV: "GOLDEN CELEBRATION" CONT'D: OUT INTO THE SUNSHINE STEP THE NEWLYWED BOB AND ROSE 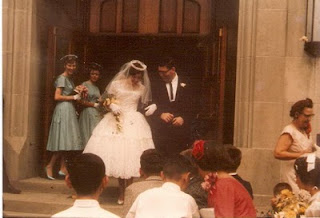 A moment after this photo was shot, the exuberant little boys at the foot of the steps showered us with rosebuds, from which the thorns had been removed.

NOTES:
*The children that day were endlessly fascinated with my wedding dress. It was styled with a skirt of tiered lace. In the fashion of the day, it gained its voluminous shape from the large hoop and numerous crinoline petticoats beneath. For me, it took great care (and some pre-practice at home) not to move the skirt and expose my underwear as Bob and I knelt for prayer at the altar rail.
*Female attendants behind us at left of photo were: Mary York (now Horrigan), who had been my best friend since first grade. It was she who made the attendants' silk dresses. And my new sister-in-law Vivian Moore (later Montgomery).
*The officiating priest, St. Mary's pastor, Rt. Rev. Msgr. William J. Gallena, shocked some people by using the words "love, honor and cherish" for my portion of the vows, instead of the traditional "love, honor and obey." Later I asked him if he was aware he had done that. He smiled (rather slyly, I thought) at the question, and all he would say by way of explanation was, "It was not a mistake." My aunt Helen was much amused by that, telling me, "Father Gallena has known you since you were born. He probably realized you were much more apt to be a wife who would cherish than to be a wife who would obey."

NOTE FROM ROSE: The anniversary postings began on Monday, Sept. 6. Click on "Older Posts" (at lower right of page) to get to the beginning.
Posted by roseabouttown (Rose Moore) at 7:05 AM