DAY ONE--PART I--"THE WEEK OF THE GOLDEN WEDDING ANNIVERSARY; A CELEBRATION FOR TWO" 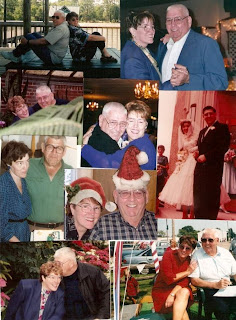 My husband and I hereby proclaim this "The Week of the Golden Wedding Anniversary--a Celebration for Two."
Between now and Friday, Sept. 10, 2010, this space will share anniversary-oriented words and photos.
Fifty years is a long time, and it does not seem possible that so many years---a half-century!---have passed.
We two are lucky people indeed to have chosen each other. We have been a good match and selfishly wish for many more years together.

THE SMILE WAS THE BEGINNING:
("They gave each other a smile with a future in it."---Ring Lardner)
In the Bob-and-Rose collage above, the key to the message is the smiles between us. I first met Bob in early winter of 1959. It was a night of heavy snows, and I was gathered with my colleagues from the Telegraph newspaper. Snow or not, we were sticking to our plans for a toboggan party. My friend at the paper, Vivian Moore, was dropped off by her brother Bob, who felt the roads were way too treacherous for her to drive alone from Concord's then-unpaved roads.
Bob and I were briefly introduced before our group formed a caravan to the toboggan hill in Chardon in Geauga County. Something clicked between the two of us right away. At first for me, it was his smile. Fifty years later, I still love his smile and his unflagging sense of mischief and humor. We may be 50 years older now, but we still have fun together.
Posted by roseabouttown (Rose Moore) at 6:29 AM