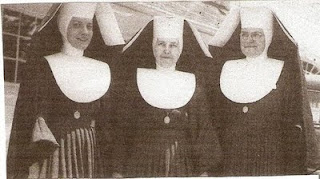 Since you asked, this is what our nuns looked like at St. Mary's when I was a student there. This was the order of the Holy Humility of Mary teaching nuns.

We always wondered what they looked like without their habits. One day my brother and I sneaked into Dr. Mehler's office when a sister was having dental work done, and we were shocked to see she did not look as young without her habit holding back her wrinkles. Her hair was short and gray; she looked like someone's kind grandmother; and she was laughing and joking with the dentist.

Somehow we lost all fear of her, right then and there.

More nunsense for you from R.A.T. (Rose About Town)
Comments welcome. randrmoore@gmail.com
Posted by roseabouttown (Rose Moore) at 4:35 PM

*When school was out, we all had to line up outside the classrooms, and the big Victrola was turned on with Sousa marching music. We marched together to the beat... down the hallways, to the front door and down the steps outside to the front walk. The public school kids around the corner liked to stand and watch and laugh at us. (Later one of the nuns told me the music was to teach us to exit in orderly fashion, in case of emergency. Don't know if she made that up. Do nuns make things up?)

*Sister Mary Alice once whacked me so hard along the side of my head that I fell out of my desk. She had refused to let me sharpen my big Laddie pencil, which had broken, so I went after the end of that pencil with my front teeth, like a beaver chewing at trees, until the lead was exposed and usable. Sister apparently considered that a rebellious act of "sassing."

*I had a very deep voice; still do. The thing I heard most often in choir practice was "Who's that singing in the basement?" Little girls, said Sister, were supposed to sing high and sweet like the birds. I guess she had never heard of alto. I was allowed to be in the children's choir only if I promised to follow her order to "just open your mouth and PRETEND to sing." Then when the boys' voices began to change, I sang for awhile in the boys' choir at church. I didn't mind that at all.

*For most of my grade-school years, our children's religious processionals in church on special occasions were often led by... ME! Not because I deserved any great honor, but because I was the shortest kid of all, and the nuns' sense of order seemed to involve arranging us all according to height. What did I hate about that "honor"? I was too close to the smell of the incense! For the processions, the sisters taught me to fold my hands and "walk like a queen with a stack of books on her head"... always walking with my eyes straight ahead and slightly downcast. I figured that unique talent might someday come in handy. It never did, except for those processions. And 8th grade graduation from St. Mary's marked the permanent end of my "career" in processions.

*Sister Marjorie was raised with many brothers. I think that explains, partially, a stunt she once pulled on the boys in our class. In "squirt-gun season," every time she caught a boy in our class squirting us with their water guns, she would quietly confiscate the guns (without a lecture or discipline, however) and store them "for now" in the drawer of her desk; she kept that drawer locked. One day she stopped the class a half-hour early at the end of the school day. She brought out a pile of newspapers and had us all cover the floor with many layers of the papers in the front of the classroom. Then she told the boys to come forward and face the chalkboard, with their backs to the room. "When I say go," she said,"you can turn around." In the meantime, she quietly armed us all girls with the confiscated squirt guns, and we really soaked those rascal boys when they turned around. It still makes me happy to think about that.

*At the end of school days on Fridays, we would quit a little early. Then we were allowed to skate all over the hardwood floors with steel-wool pads under our feet. I guess that floor-cleaning game we all loved really made us unpaid janitors. We didn't care; we enjoyed it.

*All my brothers were altar boys. Masses were sung in Latin in those days, and I learned all the words by heart, because as a big sister, I helped all my younger brothers memorize and say the words of the Mass. One day I told Father Gallena I knew the Mass better than any of my brothers or the other altar boys. I told him I had short hair, so why co uldn't I wear dressy slacks and an altar boy's smock and be an altar boy... just once? The answer was a gentle no; it was against tradition. But his eyes were twinkling, and years later he told me he had been temptedto let me do one Mass as his altar boy, just to see if I could get away with it.
Years later at a friend's wedding, I was sitting in front of the church, wearing a white maternity smock and short hair. The priest who was leading the wedding Mass came out and demanded: "What are you doing here? You belong in the sacristy; we are already late in starting the Mass." The altar boy, you see, hadn't arrived, and the priest had looked out and seen me and mistaken me for that missing boy.
(I still didn't get to say Mass).

R.A.T (rose about town)... I enjoy dredging up such memories despite (or maybe BECAUSE of) the fact that I've been out of school for more than 50 years.

Share some of your own school memories with me (randrmoore@gmail.com). I'd love to pass them on for enjoyment of readers of this blog.
Posted by roseabouttown (Rose Moore) at 2:49 PM