UNEXPECTED GIFT FROM A NUISANCE DOG

I have just just settled down in my favorite chair for one of my favorite British comedies, when my big old dog stands tall between me and the screen and bullies me into taking him outside for you-know-what. As usual, his timing is impeccable and maddening; and as usual I grab my jacket and follow him out the door, more than a little grouchy at him for the interruption.
While he takes care of his designated business, I glance up at the night sky and my mood changes. Since dawn, we've been in the midst of a February thaw---the first night in a long time that hasn't frozen my eyeballs with temps in the teens, or below.
Now the air is fresher and softer, and the clouds are scudding swiftly across the sky's surface, pushed along by lively western winds, and a big, nearly-full moon is playing peekaboo with me! His man-in-the-moon face seems to be smiling at me; maybe even winking; and I'm smiling back.
It's the sort of thing this sky person loves, and very rare this time of year. I've forgotten all about my TV show, until my crotchety old dog comes out of the darkness and nudges me firmly toward the house.
I should give him a piece of my mind; HE'S not the leader of this pack. But I know I owe him for this unexpected gift. Without him, I wouldn't have known the moon was out tonight; I thought it was raining.
R.A.T. (Rose About Town) bids you goodnight, from a better frame of mind.
Posted by roseabouttown (Rose Moore) at 5:28 PM

As I watch the Senate wrangling with the stimulus package, I feel like I'm watching the old shell game (and I don't mean Shell the gasoline company; I mean the carnival shill's shell game).
First they add 100 billion to the total, then they negotiate and SUBTRACT 100 billion, and we think---WOW!---they're really cutting it down.
Not all that different from the up-and-down gas prices. First $1.80 seems outrageous, then it goes to $4, then back down to $2 and we think---WOW!---cheap gas again! When it get's to $1.80, we're saying---WOW!---the problem is OVER!
RATS! from R.A.T., (Rose About Town)
Posted by roseabouttown (Rose Moore) at 6:55 AM

STIMULATED BY THE PACKAGE?

Wow! Blood pressures really warmed up the gym today as people of all ages and all types talked about the stimulus package. It felt like the dawn of a Gymnasium Tea Party, with 100 percent of the exercising population angry about the particulars in the package. (The gym was FULL today, so does that count as a poll?)
I heard one man suggest a deep cut in the payroll tax might encourage some employers to hire or re-hire, "including me."
Okay, blog fans, share some of your own words with me. If you feel less inhibited by registering as Anonymous in the profile blank before posting your comment, feel free to do so.
Let's share some ideas.
R.A.T. (Rose Around Town)
Posted by roseabouttown (Rose Moore) at 7:44 AM 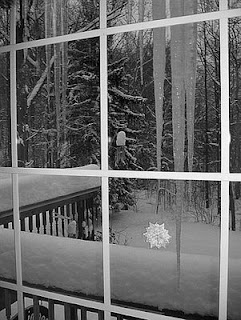 Posted by roseabouttown (Rose Moore) at 7:57 AM

At top lip of our snowy valley

Posted by roseabouttown (Rose Moore) at 7:54 AM

Driving near our snowy valley many inches (feet?) of snow ago

Posted by roseabouttown (Rose Moore) at 7:51 AM

I'm still bundled up in my heaviest nightclothes, though it's close to 10 a.m. When we awoke this morning, it was 10 below zero and the mercury was still going DOWN. It ended up (last time we looked, after racing back under the covers) at minus 16. Now it has now warmed delightfully (?) to five below, enough for us to crawl reluctantly into the morning.
My brain has frozen; I may not produce anything more than this BLOG OF GREAT COMPLAINT for you today. It's FEBRUARY, for crying out loud! Good thing a human's tears are salty, or my eyeballs would have frozen!
Still... the beauty...
Posted by roseabouttown (Rose Moore) at 6:47 AM

What we need today is another corporate raider like T. Boone Pickens was in his hey-day. He would take over a company and fire all the dead wood at the top end of the scale and promote the good people up. Believing as he did that stockholders were being raped by corporate management, he would "lean" the company to reverse that situation.
He was under appreciated. We stockholders need more people like him.
R.A.T. (Rose About Town)
Posted by roseabouttown (Rose Moore) at 11:59 AM

I caught an old Andy of Mayberry re-run the other night; it was old-time simple, but to me it seemed the writers of that episode had seen into the future.
Andy was concerned that Opie and his buddy were fighting too much and playing games that involved wrestling and fighting; they just weren't being nice enough to each other. The same for two of Andy's friends, a married couple who seemed to be always verbally jousting.
Andy knew Opie and his buddy really cared about each other; so did the married friends. But he decided to make things better, counseling and overseeing that they always be nice; never hurt each other's feelings; withhold all angry or confrontational words...
Andy's well-meant interference spoiled both relationships. The young married couple became distant with each other and also seemed annoyed with everyone in town. Opie's friend decided it was no longer fun to play at Opie's house. Too many rules. Too much outside inference. An absence of spontaniety and natural ease between friends. Loss of the natural give and take... No real playing...
Over all, it seemed as if the writers had foreseen today's tendency to deny young people any opportunity to negotiate and strengthen their relationships in their own ways. Everything and everyone suddenly had to always be "nice." To measure all their words and worry constantly about saying the wrong thing.
It made me think about today's "conflict management" in the schools. It doesn't seem to work as well as the old way of letting the kids negotiate the "sticking points" themselves.
On the same track, today's overdone "political correctness" seems to make it hard for us to communicate with people who are different from ourselves, for fear of saying the wrong thing and having our intentions misjudged.
All in all, it keeps us from truly getting to know each other and forming an honest friendship.
R.A.T. (Rose About Town) says "RATS!" to all that. Let people be people without the social engineers coming between us, despite their good intentions.
Posted by roseabouttown (Rose Moore) at 1:50 PM

POINTS OF VIEW AT THE COFFEE SHOP

Today at the coffee shop at which we stop on the way to morning gym, Bob and I were delighted to hear on the radio news that Pittsburgh schools announced a two-hour delay in opening. This, according to the superintendent, was to allow for the delayed bedtime due to last night's Super Bowl and the subsequent celebration of their victory.
"Whoa," we laughed. "That's delightful. They should have pronounced it a holiday."
We shared that sentiment over coffee, but the coffee shop proprietress expressed gentle but firm disagreement.
"I think that's wrong," she declared. "It gives the kids a bad example, that football is more important than it should be... And also, that you can party all night without consequence."
That made us stop and rethink things on the semi holiday, and the co-mingling of various viewpoints is just one of the values of such coffee conversations.
R.A.T. (Rose About Town) is still pondering Pittsburgh's unexpected sleep-in gift for its students. What do YOU think?
Posted by roseabouttown (Rose Moore) at 9:19 AM

SPRING THINGS: TO EVERYTHING A SEASON

The seed catalogs haven't found their way to the mailbox yet, but this morning in my Northeast Ohio valley, I saw a group of mourning doves--harbingers of spring in this part of the country. Soon I'll see a duck or two returning to the creek (after all, it's February), and perhaps a great blue heron flying in from winter relocation. Best of all, today the dawn arrived before I was expecting it; the days are growing longer.
Now... all I need is to hear the rich and throaty morning greeting of a redwing blackbird, and I'll know that spring is in the wings, though winter will, as always, be reluctant in relinquishing the stage.
I may love the winter as I love all the seasons in my Ohio, but I'm champing at the bit for the earth to free itself from snow and come to life again.
R.A.T. (Rose About Town)
Posted by roseabouttown (Rose Moore) at 9:00 AM